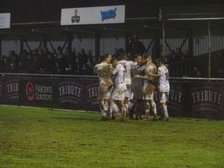 PREVIEW: Only Way Is Essex for The White Tigers on Saturday

Robinson looking to bounce back against in-form hosts...

THE WHITE Tigers are Essex-bound on Saturday as we take on Billericay Town (kick-off 3.00pm).
It’s fair to say that our hosts have had something of a roller-coaster season since we slipped to a 4-0 defeat to them on the opening day of the campaign.
But with Harry Wheeler back at the helm, they sit fifth in the table having won their last two games, against Welling United (2-0) and Slough Town (3-2) to make it just one defeat from their last five matches having lost five games in a row prior to that.
They have seven wins from their 14 home League games this term and White Tigers’ boss, Leigh Robinson, knows that we face another tough challenge as we look to bounce back from Tuesday’s home reverse at the hands of Wealdstone.
“It’s a bit of bad timing to be coming up Billericay now as they have got themselves going recently whereas in December they were in a bit of turmoil and were losing a lot of matches,” he said. “However, our focus is firmly fixed on getting back into winning ways.
“The lads put in plenty of effort on Tuesday evening and they deserved to get something out of the game, but we gifted them a penalty at a key time to level the scores and this combined with our failure to take the chances which came our way meant that we got nothing.
“There were plenty of positives to come out of the performance, though, and I was pleased with the fight that we showed, but we know that there are areas of our game that need improvement and we’ll be working hard to do this, starting on Saturday.”
The Supporters Club are running transport to the game – click here for information...