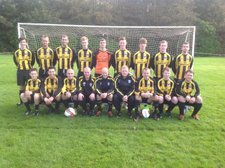 How the club was formed

Founded in 1978 by D. Blekinsop, R. Robinson and A. Shennan. The club began playing in the sunday league and were then known as The Grove. The club was self supporting raising founds from dances, kids five-a-sides, coffee evenings, raffles and with help from Mr and Mrs W Blekinsop (Land Lord and Lady) of the Grove pub, the club survived.

In 1981 the club joined the North Northumberland league winning Division 2 and the Robson Cup in their first season. Also in 1982 the team won the Sunday league five-a-side and PCC Cup. In 1984 the club changed there name to Tweedmouth Amateurs after the Grove pub changed hands and did not want to be associated with a football club. Also in 1984 the club joined the Border Amateur league winning the Walls Cup in the 85/86 season. The team won the Wright and Crammond Cup. They then went on to win the Yetholm and Crammond Cup in 1988. The club used the drill hall as there base and with help from Betty Clark, Liz Taylor and Hazel Clark the club managed to put on food after games.

In 1993 the club moved to the Kings Head pub and were sponsored by the landlord Mr Ian Stewart who provided changing rooms and showers within the pub grounds. The club also formed their first official committee with Ian Stewart as Chairman, and Liz Taylor as secretary and treasurer. The team also moved up to Division B after ending the season Division C runners up.

In 1995 the club moved to the legion because of a sponsorship that was too good to turn down, They also had to change their name to Berwick Legion. This was the season that Ian Strang introduced the numbers draw. In 1996/97 the team won Division B but only managed to stay in the top flight one season. In 1997 the club left the Legion after a falling out, and changed their name back to Tweedmouth Amateurs. They ran the club from the Bonarsteads pub who inturn provided a set of strips and food after home games. In 1997 the club also started a youth policy ran by Steve Bruce, Robin Clark, Neil Renton and Derek Pearson.

In 2008-2009 the Amateurs finished forth in the league and missed out narrowly on promotion once more. They also reached two semi finals and remained unbeaten at home all year. The Colts were managed by Tommy Dixon, and continued to develop future talent for the club.

Managers Player of the Season

Players Player of the Season