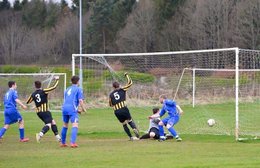 A Steven Shennan hat-trick took Chirnside through to the quarter finals of the Border Cup after they eventually saw off a dogged Tweedmouth side. It was Tweedmouth who drew first blood after Phillips played through an inch perfect ball for Wood to run onto and round the keeper for the opener. The home side then enjoyed a period of possession and it took two fine stops from Stobart to keep the visitors in the lead, until ten minutes from the half when the pressure paid off and the home team equalised.

Tweedmouth again took the lead in the second half when a Tait corner was handled by a defender and Robertson made no mistake from the penalty spot. Again, however, they were unable to hold on to the lead for long as again the home team pushed forward and Shennan drew the teams level.

Chirnside now had the momentum behind them and only two minutes later took the lead. With time running out Tweedmouth decided to gamble, pushing men forward in search of the equaliser. This left them vulnerable to the counter attack and when Shennan completed his hat-trick, the tie was sealed for the home team.

The two teams meet again this weekend on league duty.

Tweedmouth Amateurs would like to thank R L Smith & Sons Ltd and Castle Blinds for sponsoring the travel costs.