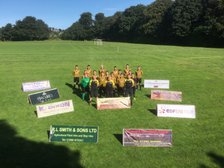 Tweeddale take all the points

Tweedmouth suffered a major setback in their battle against relegation, going down to fellow strugglers Tweeddale at the Five Arches. The home team had hoped to build on their encouraging performance the previous week against league leaders and kept faith with virtually the same team hoping that almost pulled off an upset. However it was the visitors who seemed to settle quickest and they took the lead after a huge bobble left Tait swinging at thin air as he attempted his clearance. This left the visiting striker with a clear run in on goal and he made no mistake.

Tweedmouth did eventually settle and grew into the game as the half wore on. The home team were driven on by Walters who was having a fine game in midfield, time and against winning tackles to set up attacks. Shortly before half time the home team drew level. A move up the right hand side saw the ball laid back to Walters, who shot from the edge of the area to score his first goal for the club.

Half time came at a bad time for the home side, as they had the momentum following the equaliser. They needed to make a strong start to the second half and forced a series of corners, but were unable to break the deadlock. It was almost inevitable that this game would follow a similar pattern to those of previous weeks and so it proved, when slack marking allowed the visitors’ forward to turn and shoot from inside the area giving Tweeddale the lead again, Tweedmouth found themselves behind despite enjoying the better of the play.

The second goal seemed to spur the visitors on and the game was killed off soon after with a third, giving the away team all three vital points to lift them off the foot of the table and close the gap to one behind being Tweedmouth with games in hand.

Tweedmouth would like to thank match sponsors Direct Pets and EDF Energy.

Tweedmouth face Gordon at the Five Arches on Saturday, the final game before the break for Xmas and New Year.