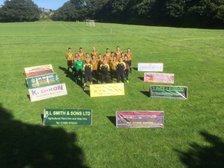 Tweedmouth made the journey to Langholm hoping the New Year would see an upturn in their league form but returned home empty handed and to rub salt into the wounds, results elsewhere see Tweedmouth drop to the foot of the table.

It was the home team who made the brighter start and opened the scoring when a long ball cut through the Tweedmouth defence. The lead was almost doubled when a slack back pass was intercepted, but Stobbart did enough to put off the striker and the shot went off target. This proved important moments later when Clark crossed from the left for Falconer to knock down and Phillips to finish from the edge of the box to level the score.

The equaliser lifted Tweedmouth, who had the better of the play thereafter, pressing the home team into mistakes and winning more loose balls. They almost capitalised on the momentum with Tait hitting the crossbar from distance. But it was the home team who again took the lead, this time in spectacular fashion, with a 25 yard shot which flew into the top corner. This was the cue for a flare to be let off by the home support, bringing a flavour of the San Siro to surroundings.

The second half started off with both teams intent on attack. Tweedmouth again hit the crossbar, this time Wood from a free kick, while at the other end Stobbart produced a fine save from close range to keep the deficit to only one. The home team were looking dangerous from set pieces with one header cleared off the line, but were not to be denied when a second corner was headed in via the underside of the bar.

Robertson pulled a goal back for Tweedmouth with an excellent free kick, which set up a frantic finish. Tweedmouth throwing everything they had at the home defence, who stood up to the challenge. The celebrations at the end of the game showed what the win meant to the home team, who pull away from the relegation zone.