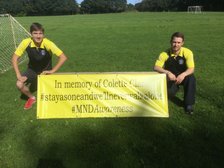 Only a point for the Ams in last home game

Tweedmouth played host to relegation rivals Gordon in a tense midweek fixture. The home team were given the perfect start in the first minute when Antcliff ran down the left wing and his teasing cross deceived the Gordon goalkeeper. The lead did not last long however, as Livingstone was allowed time and space in the box and picked his spot. Tweedmouth took the lead for the second time after a shot from Heugh was only parried and Antcliff was on hand to place home the rebound for his second. Again however the visitors hit back, this time Brown the scorer. And to round of a good first half for the visitors, a free kick was glanced in from a free kick right on the half time whistle to give them their first lead of the game.

The third goal seemed to knock the stuffing out of the Amateurs and they made a slow start to the second half, Gordon enjoying the better share of possession and creating the better chances. This changed when young full back Malcolm won a free kick on the edge of the area. Antcliiff whipped in a free kick which Wood met at the back post for the equaliser, both teams then traded good chances, with Robertson and Malcolm both going close for the home team. Then with five minutes left Gillie seemed to have what would have been a decisive goal when his shot from the edge of the area found the top corner. But the home team refused to give in and straight away equalised again, this time Malcolm heading in after a scramble from a corner.

A point each was a fair result for both teams who gave everything in an exciting game. Tweedmouth travel to Greenlaw in their final league game of the season knowing only a win will give them a chance of retaining their Division A status.