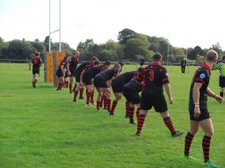 A brief summary of the recent results for Ts over the past few weeks.

I do apologise all for not being able to provide a match report for the past couple matches, but I do also have a day job so I can’t always find the time to get a report out. If anyone has an issue with that please take it up with me and I’ll let you know where you can stick your 2 pence.

Since KCS at Home Ts have had 3 games starting with March 9th away to Old Reigatians. OR’s away has never been a victory for the club, always closely fought matches but not very high scoring. OR’s are renowned for their defence around the park and their ability to turnover ball at the breakdown, a side that finished 2nd last year we knew it would be a tough match, but we had caught wind that of late they had suffered a high number of injuries that impacted the squad.

Nevertheless, ORs still came out from the off with their fast wide style attack complimented by the low and smothering style defence that Ts have typically found difficult to break down. The blistering conditions also had an impact on both sides style of play but Ts structured attack and playing in the right areas field meant that Ts were able to get a few early scores. ORs came back fighting, quick taps and their forwards working around the corner caught Ts off guard and they were able to get a couple of scores.

The 2nd half was a lot tighter between the 2 sides, but Ts strength and depth kept ORs at bay and managed to extend their lead, in the first time Ts had won at the ground. Look forward to seeing them again next year, but the final result was 26-14 to Ts

After a week off the next game at Parkfield’s on March 23rd was against Old Cranleighans, a side that produced the only nil against Ts this year. Ts were up for this fixture as they felt they owed one over the opposition. That wasn’t to say they weren’t expecting a tough outing, OC’s have some lethal backs, when released in space & time on the ball they proved they can score from all over the field.

But this week Ts consistent pressure and structured attack broke down the OC’s defence, our forward worked fantastically in set piece area, which gained penalties that were later punished by scores. The backs when released, used their runners well to open up gaps for the outside backs who scored some beautiful running rugby try’s throughout the match but it was 34-12 the final result.

Last week Ts made their way to Old Alleynians, a side they’d beaten at home but since had a great record and pushing for 2nd spot. This was not going to be an easy task by any stretch of the imagination, these play similar style game to Ts expansive and fast paced. Ts would take the early lead applying pressure to the home side, but then came unstuck without any possession OAs were able to then discombobulate Ts and rack up a few scores, OAs went into the break with a strong lead.

Ts however, came out strong, again dominating the early part of the 2nd half, with a couple of scores to close the gap, but a yellow card and some injuries really took its toll later in the half and OAs were able to come away with a strong win but Ts were able to get a try BP, the final score 45-22.

This week Ts finish their season against London Exiles at Parkfields, a huge game for the side fighting to stay up, it will be a big game to end on. Kick off at 3pm.

Thanks for being patient but like I say I do have other things to do.