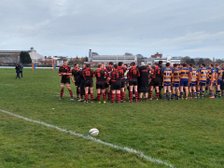 Parkfields hosted KCS who have not dropped a point all season to confirm their promotion the week before this contest, but what a game it was.

Ts hosted the league winners in at home in what was undoubtedly going to be a tight contest, the weather was a slight gust across the field but nothing to spoil a day’s rugby.

The side on the day.
Forwards; Joey, Ricky & Fyles are front row, with Knighty & Dowden at locks, Luke, Jasper & Chris make up the back row.
Backs; Sam & Mike at half backs, with Jash & JH in the centres with Rose, Wilde and Fozzy the back 3.
Replacements; Senior Gibson, Haskell & Bucko

This game was highlight anticipated by Ts as they knew their depleted squad fixture against these earlier on in the season was a bit of a drabbing but this week Ts were much closer to full strength and at home which is always an advantage. However, KCS from the off proved why they’d already won the league taking the game to Ts right from the off, the game in the first 10 minutes was attacking rugby from KCS and a lot of defence/clearing from Ts. 15 minutes passed and KCS managed to convert.

But it would be a speedy response from Ts as they come down the field themselves displaying some of the structured attacking rugby they have in the locker. Soon as possession came Ts way they needed to hold onto it more and starve the opposition. Managing to level after 20 minutes, KCS again marched their way down the field but it was Ts pens that were their own undoing, as KCS punished Ts by putting them into the corner.

KCS were playing expansive rugby stretching Ts across the field, Ts were able to defend to a certain point but KCS were able to extend their lead some more and the half ended 21-7.

Ts came out the stronger of the 2 sides in the 2nd half, KCS giving a few penalties away Ts were able to pin them deep into their half before the forwards worked together to close the gap to 21-14. It stayed a tense game for the next 15 minutes, both sides similar in their styles, structured forward running with strong wide moves in the backs. With only 20 minutes on the clock a yellow card to KCS, then a yellow to Ts along with a couple of injuries threw off the momentum of the sides.

From this momentum shift KCS seemed to respond better, they managed to pin Ts back and speed the pace of the game up which suited their style of play, any mistakes Ts made they were punished. However, Ts gave it their all until the 80th minute, post-match the Skipper went onto discuss how hard defensively Ts worked on the day so credit to the boys.

However, ending the game with an intercept try it summed up the game on the day, close but just a couple of mistakes that were punished by a strong opposition.

Apologies for the delay, but I do have a day job also.

Thanks for the read.
JH