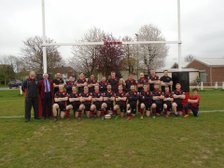 Ts finish at home against local rivals London Exiles who are fighting for a place in LSW2 next year.

Parkfields hosted the final game of the season with beautiful conditions and a great crowd to support, it’s been an up and down season for Ts, losing some games they feel they shouldn’t have but also winning some very close battles.

The side, forwards; Joey, Fyles & Penson were front row, skipper Banks & Dowden at Locks with Luke, Mooro & Mo the back row.
Backs; Biff & Mike partner at half backs, with Jash & JH in the centres completed by Rose, Wilde & Goddard as back 3.
Replacements; Jasper, Chris & Scholesy

The game had a little more meaning to it than normal, Joey is soon to be leaving us to go to the sunny shores of Aus where we wish him well and hope he realises how much he’s going to sweat. Mo who broke records this year also felt that it could be time to hang up the boots, a career that no other player could replicate, he thinks it’s all over….

After some initial early pressure from the away side Ts were awarded an early pen which helped relieve some pressure, the lineout didn’t go as plan but a turn over from the next scrum gave Ts great front foot ball, after a couple forwarded phases the backs took it wide where a set move saw Jsh break through offloading to Mooro who kept it in field. The classic Fyles – Banks tip on lead for a clean break just the full back to beat which he manages, Goddard made it 7-0.

Exiles who had a mobile pack really used their runners well to put the pressure on Ts defence, it was working, a few costly penalties meant Exiles were creeping further into the red zone. Credit to Ts defence though, with standing a barrage of strong runners they held strong but did come away conceding a penalty which Exiles slotted 7-3.

The pace of the game really ramped up, the speed of play from Ts meant they stretched Exiles across the field however, Exiles were resilient, not giving any easy metres and ensuring they made all the break downs messy. But all within the letter of the law, well-structured attacks, saw Wilde & Rose with chances on either wings, but again Exiles were able to holt the attempts at the line.

After all the efforts, Goddard missed a penalty chance and Exiles then made their advances down the field, so much so that they were in the red zone in just a couple phases, Ts had to scramble as much as possible, Goddard comes out of nowhere to thwart a great Exiles chance that was then later knocked on over the line. Ts clear their lines well and put the pressure on set pieces, Dan Rose manages to get his long arms on the ball for an intercept where was called in touch but VERY dubiously watching the footage back.

After one more attempt with a strong maul from Ts the half came to a close, both sides evenly matched with some great defence & attack on display.

Exiles got the game underway, after a few minutes of kick tennis from both sides, JH & Wilde found themselves carrying some early ball well in at the beginning. But the continuous defence pressure form the Ts meant Exiles were finding it difficult to escape their own lines. With all this pressure Banksy again lead by example getting his hands on a charge down for Dowden to get himself a 2nd score of the season, Goddard misses off the upright, 12-3.

Ts continue the barrage of attacks, Rose on one wing tests, before Mike uses the forwards who get it out the back for JH to break the line and Wilde to fall inches short of the line, but that just gave all the space in the world for Rose to then run in the corner, Goddard misses from the touchline but 17-3 the score. JH later gives a grubber for himself and Scholesy to get on but it just trickled too far for either of them.

Exiles mixed up their style of play, taking quick taps, offloading a lot more and playing from all over the field, it really gave them front foot ball but Ts defence like it had been all day was holding strong. It was with about 8 minutes to go that Exiles were able to get their first score of the match but it would be their only score, it wasn’t that they were bad on the day far from it was just that both sides defence were strong for the full 80.

Ts closed off the game there and we look forward to a break but also having some players returning next year, its been a long season, bodies are hurting but the black & reds finished strong with a great social that evening!

DOTD; after stating ‘it wont impact my game’ 5 minutes in, it did impact his game Goddard kicked like Dan Rose.

Thanks to all those that read these, another season done and another break of my awful spelling and grammar.
Until next time
JH