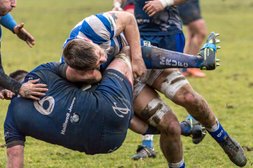 Macc were not going to allow us to run in 38 unanswered points in the first half as we did at Priory Park and came at us with some determination putting first points on the board. It took Tyne some time to find their natural way of playing: fast, good handling, adventurous running, but were unable to dominate the first half going into the break just 14-7 up. Despite the heavy conditions both sides sought to move the ball and Tyne's defence needed to be steady to hold Macc out, but so they were. The second half was reasonable comfortable for Tyne who scored three more tries.

Spencer double gets Dale through
After a shaky start on a heavy pitch, Tynedale settled down to cruise to a comfortable win over Macclesfield.
The Northumbrians could hardly get their hands on the ball in the opening minutes and what possession they had they kicked. It was all Macclesfield and they thoroughly deserved their fifth-minute lead through prop Brendan Berry, with Lewis Barker converting. But the first time Tynedale ran the ball rather than kicking, they drew level, full-back James Spencer converting his own try after slick handling on 11 minutes. Three minutes later the home side were in front following good work at the lineout, centre Will Miller crossing.
The lead stayed at 14-7 until four minutes into the second half when Spencer grabbed his second try from another lineout, Rodgers adding the extras. Macclesfield went down to 14 men when No.8 Ryan Parkinson was yellow-carded and they were unable to prevent Tynedale getting the bonus point through tight-head prop Ben Wilkinson, Rodgers converting taking it to 28-7. Rodgers grabbed Tynedale's fifth try and converted himself before Charlie Reed slid in at the corner to give Macclesfield a late consolation.