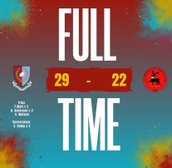 The Villagers bounced back with a good home win on Saturday, defeating Clydebank 29-22 at Castle Policies

A lightening start saw the Villagers go 5 points up in the opening minute through a Fraser Watt try, and they doubled the advantage on 15 minutes when Andy Watson crossed the whitewash.

The Bankies pulled one back on the half hour mark, and the teams headed for the half time jaffas with the score line sitting at 10-5 in Uddingston's favour.

If the first half had been tight and edgy, the second opened up, and it was Clydebank who scored first before the Villagers went on a scoring spree.

Watt claimed his second of the afternoon before Ru Anderson crossed twice in 10 minutes. Cammy Quinn slotted 2 of the conversions and the Villagers were sitting with a comfortable 29-10 advantage with 14 minutes left to play.

With the match heading into the final 5 minutes, and the Villagers looking good for the win, things suddenly got interesting. Clydebank claimed a converted score to narrow the margin to 12 points, and with Mickey's big hand edging closer to the 80 minute mark they took their chance to cross again, securing both the 4 try bonus and the losing bonus points.

Next Saturday, 01/10, the Villagers are back on the road with a trip to the West End to face Glasgow University Medics. Kick off 3pm