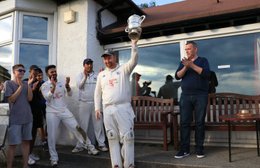 "...they showed their experience and battled through it."
Bryan Clarke

After losing the toss and being sent in to bat in tricky conditions, Uddingston were on a shoogly peg after three of their top order batsmen went cheaply. However, the experienced pair of Gul and Bradley, who were both in the 2013 title winning team, got together for a vital partnership of more than 100 runs that effectively sealed the silverware for Uddingston.

“Aamir and Gavin were excellent. The wicket was doing a lot early on, but they showed their experience and bravely battled through it. Gavin played the role of the aggressor, while Aamir was able to frustrate the bowlers as he often does,” said Clarke.

Gul and Bradley helped The Villagers score a respectable 234 from their 50 overs, but with Scotland international Richard Berrington in the Clydesdale batting line up, there was still plenty of work ahead for Uddingston’s bowlers. Paceman Abdul Sabri got Uddingston off to the ideal start, dismissing Clydesdale opener Angus Gul in the second over. The Titwood side were struggling against the sheer speed of Uddingston’s bowlers and were soon two down after the consistently impressive Niall Alexander took his first scalp.

With Berrington at the crease, Clydesdale were still in with a sniff of victory, but he wasn’t able to get support at the other end. When the Scotland international was caught by Harry Singh for 69 trying to reverse sweep an Anwar Hafeez delivery, the game was all over bar the shouting. Gavin Main and Aamir Gul mopped up Clydesdale’s tail, sealing the win and the title trophy for Uddingston.

“It was a career highlight for me,” said Clarke. “The team have trained hard all year. The pleasing thing for me is that we all contributed at some point during the season. Everyone has made a difference. We have trained and played as a team with clear plans for each game. The players have executed these plans because they train hard on their skills. I am so proud of them.”

The season isn’t quite yet over for Uddingston. This Saturday they return to Titwood to play Forfarshire, who won the Eastern league. The winner of Saturday’s game will be crowed Scottish club champions.

“It will be interesting to see how Forfarshire handle the Uddy attack,” said former skipper Ricky Bawa. “Amir Gul is the leading wicket taker both Premier Divisions at an average of about 8. I also remember Darren Lehman saying in an interview a while back something along the lines of “Gul was the most difficult bowler to face in Adelaide domestic cricket”. We have a relentless seam attack of Alexander, Sabri and Main. Forfarshire would have to be favourites, but you can never count this Uddingston team out. They’ve been on the brink a few times this year, but they’ve always found a way to win.”