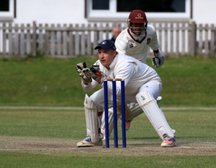 For the past 72 hours, Uddingston skipper Bryan Clarke has set up residence at Bothwell Castle Policies. Such was his desperation to get the ground ready for the crucial clash against Prestwick, Clarke even paid a redirection fee for his Daily Star delivery each morning. When the paper boy arrived on Saturday at 7.25am, Clarke was already sitting on the heavy roller, listening to Charlie and the Bhoys’ greatest hits.

Clarke’s dedication to the cause paid off. When games were getting canned all around the country, Uddingston were able to start at 12.30. Remarkable, considering the ground had soaked up 233mm of rain since Wednesday evening.

“Bryan’s dedication to the cause is admirable,” said David Gallagher, the Bothwell all rounder. “He is probably the most hard working clubman I have ever met.”

After winning the toss, Clarke chose the bowl. Niall Alexander (1-28) and Abdul Sabri (1-28) bowled with pace and control, as the Prestwick openers waited patiently for scoring opportunities. Prestwick did well only to loose one wicket in the first hour, but the introduction of Ross Lyons (2-30) and Amir Gul (2-26) was the catalyst for a mini collapse by the visitors, who tried to milk runs as often as they could. Mo Awais (3-42) was able to get plenty of purchase from the pitch, but Prestwick were able to scramble vital runs near the end of their innings as they reached 155 all out.

Uddingston’s reply got off to a typically positive start, with Awais and Anwar Hafeez looking confident. Awais was the first to go, however, with the score on 24. Not long after, the heavens opened and the game was abandoned.

“It was such an anti-climax,” said Gallagher. “I gave the players my support in the morning before heading off to Prestwick for our game. The late showers weren’t forecast. All the hard work the club, especially Breebs and Rab (groundsman) put in, meant nothing in the end. We were able to get some miles in the clock I guess, which will stand us in good stead for next weeks climax.”

Uddingston travel to Clydesdale next week. If The Villagers win, they will lift the WDCU Premier Division trophy. If they lose and Prestwick win, the Ayrshire side take the spoils. It promises to be an exciting end to the season and with some sunshine finally predicted for next weekend, both clubs will be expecting plenty of support.