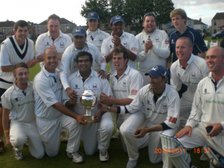 Comfortable for the Villagers

Uddingston cruise through to Round 2 of the Scottish Cup

Uddingston beat Renfrew comfortably by eight wickets to advance to the second round of the Scottish Cup.

The game was played at Bothwell Castle Policies due to issues with the ground at King George VI Field. It was the Renfrew team that won the toss and decided to bat first. The innings started badly as they had lost their first two wickets with just a wide on the board, Abdul Sabri taking both wickets. Syed Ali Kazmi (64) became the rock of the innings and had support from Tarun Khadiya and Abid Shuja to recover to 115-4. However, just 54 more runs would be added as the middle and lower orders started to crumble. Abdul Sabri collected another two wickets to finish with four, and Harmanjit Singh contributed three, including Kazmi. Amir Gul and Zaighun Ahmad also contributed wickets. Renfrew finished with 169 in 47.4 overs.

In reply, Uddingston lost Nick Martin early to Qadair Ahmed's bowling, but Ahmad and Singh then started to hit the ball to all corners of the ground. Both would make comfortably half centuries before Singh was bowled for 68. Uddingston only need 10 runs from this point, and this was achieved with Ahmad finishing on 73 not out, and Gavin Bradley hitting two fours.

Uddingston will play Watsonians in the next round.