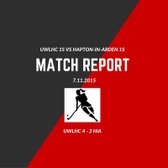 #notsojollynow
Molly Adkin
We entered the car park as Ian’s white van ominously loomed out of the mist. It was 8:30am, and the miserable conditions suited our mood: ‘Pathetic fallacy, some would say gals’ said Jenny ‘the guru’ Farrant. And she was right. Feeling tired and down, the UWLHC warriors struggled to lift the mood and engage with the tough game ahead.
We were up against Hampton-in-Arden, a team who saw our last match end with several cards on their part before we well and truly shoed them. But standing there in the wind and rain, the UWLHC warriors knew they must summon up something to secure a win... and then, as if she was the answer itself, Jess mysteriously arrived (she had woken up 15 minutes earlier). Things were looking up.
Pitch side we started to engage with the task ahead and produced a short and snappy warm up despite the worsening conditions. The starting 11 went into position with ‘fire in their bellies’ (Ian wiped a happy tear from his cheek at this) and the game began.
Yet all too soon it became clear that this game would become a war, with UWLHC conceding a sloppy goal and going 1-0 down in the first 10 (I think this was my fault, but let’s blame Pingu). Despite this early concession, we began to return the aggression and our game seemed to improve. It was the miracle herself who then began to shine, as Jess slotted a great through-ball from Alice past the left post, making the score 1-1 at half time.
To our shock, Ian did not hurl his clipboard, but instead helped Wanger with her marking position (wonderfully demonstrated). We were once again in it to win it, and feeling positive, the whistle blew.
Hampton-in-Arden however began showing their true colours, and as the game once again descended into chaos, with stick tackles and shoulder barging all over the shop, we conceded another early goal making the score 2-1. We had a lot of work to do.
All the while, Captain Bean had been putting in hard work for her CMD practice, pointing her toes and incidentally kicking her player on the leg. Player trips over and probably cried. Cards were threatened (#notsojollynow). Play resumed.
Ex-skipper Kat then took things into her own hands, by dribbling masterfully up the pitch and schlotting it left post, where a perfect deflection from Alice lifted it into the back of the net. 2-2.
After this, the goals came thick and fast for the red and black army as the oppo lost the plot, with Jess scoring a further 2 goals before the full time whistle blew.
Fresher Rachel Hindely was named player of the match for her excellent runs up the wing from the defence, and her improved strength on the ball. Jess was ‘very impressed’ at this, which summed up everyone’s opinion. So very damp and with another 3 points on the table, UWLHC are very happy to have beaten such a delightful side.
Share via
FacebookTwitter
https://www.pitchero.com/clubs
Recent news