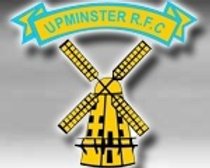 Upminster made the long trip to Harwich on what proved to be a great win under difficult circumstances on the road on Saturday. Upminster were in great spirits after a strong training session on Thursday and a long coach trip which always provides a recipe for success.

The first half consisted of both teams struggling to make any real ground or progress. The weather had taken a turn for the worse at the start of KO with driving wind and rain really hindering Upminster's opportunities. As you can imagine there were several handling errors from both teams and when Upminster were in threatening positions the elusive “final pass” evaded us. Chris Lamb was able to add 2 penalties to bring an end to the first half with the score at 0-6. Upminster were dominant in the set piece but struggled to get a foothold in the game with Harwich displaying good tackling and strong competition at the breakdown.

Upminster returned to the changing rooms at the end of half time to gain some respite from the conditions. Upminster were not happy after their first half performance and were determined to play a more structured and tighter game in the second. At the start of the second half Upminster perhaps a little to eager to play gave a very kick-able penalty away which Harwich converted to make the score 3-6. This buoyed the Upminster team as the next twenty minutes proved costly in all fronts for the home side. Upminster started to dominate with excellent running from Jimmy Harper and Sean Davis, really opening up the Harwich defence. The turning point was a scrum mistake from the Harwich team, as the ball spilled out the back the reactive Rob Stanley (who fractured his finger earlier in the first half) pounced on the ball. The ball was then spread down the hands on the blind side, eventually finding George Cox who beat numerous defenders to score in the corner. Chris Lamb added an excellent conversion to make the score 3-13. Upminster again gained the restart and pushed on into the Harwich half. Consistent phases led us to being in a really promising position in the Harwich 40. Rob Stanley with the deftest of touches kicked the ball into the corner for Chris Lamb to chase. The ball looked to moving away from him and into touch but the wet ground slowed the ball down and Chris Lamb beat the chasing Harwich player to score, again in the corner. Chris Lamb was denied the extra points, the score was 3-18. Into the last 15 minutes it was all Harwich. Mistakes and silly penalties led Harwich to capitalising in our half. Harwich had numerous penalties, scrums and line outs. The best chance fell to the pacey Harwich fullback who while playing on the wing exploited some space on the blindside, evading tackles and eventually being brought down by Conor Evans within our five metre line. Upminster repelled and defended bravely for the remainder of the match. With special mentions to Danny Canary, Josh Libberton and George Cox who continuously either disrupted Harwich’s flow or dominated collisions to not allow any momentum for the home side. The final score was 3-18.

As the final whistle blew the Upminster support erupted and jubilant celebrations followed late into the evening. Special thanks to Harwich for hosting us and for all the support who made the journey to watch. Special mentions must go to the Upminster back three who despite playing in awful conditions managed the high ball very well.