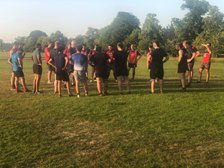 A warm start to the season

Tuesday marked the start of our Pre-Season training, with 18 of the lads turning up to enjoy the sun and get the ball in hand. It was also the first session being lead by our new head coach Nick Lambert, who introduced some new drills and calls, as well as some more familiar ones! We also took part in the Haringey 10s Tourney, we won the cup last year and we were eager to defend out title, sadly we fell short at the last hurdle, which with temperatures reaching 34 degrees is to be expected! Some great rugby was played, including a 55-0 win over Warthogs. We also made it to the final of the drop goal contest which we won, so there was a victory to be found there!

If you fancy getting involved with the club, come down to a training session Tuesdays and Thursdays, down at the First Team pitch!