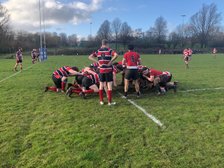 Uxbridge win at death to advance to semi-final

Bridge leave it late to secure home win against Watford

Uxbridge were allowed to take their eye off league competition for a week and instead focus on the Herts and Middlesex 2 Cup. Having got through to the quarter finals through previous byes, a place in the semi finals was at stake.

A relatively lethargic warm-up was followed by a relatively shocking 25 minutes in which Bridge conceded three unanswered tries to give Watford a 21-0 lead. I usually look for some positives when scores go like this, but I don’t think I’m being unreasonable in saying their weren’t any.

Undeterred, Bridge eventually got going and scored three answered tries through Liam Clancy, and two for Sam Dillamore to take the half time score to 21-17.

A rousing Churchillian speech was needed from coach Ron Mathews and although it wasn’t quite We’ll Fight Them On The Beaches material, it did give the team all they needed to go out into the second half full of hope.

Bridge had much more purpose to their play and finally started making meaningful forays into the visitors half. Strike-man Dillamore then completed his hattrick after much pressure from the forwards and recycling of ball.

There’s no real reason to cover this with a paragraph, but I had to work him in somehow....the best skiing ginger on the team Joe Elwig was having a good game down the open side wing along with Will Searle at fullback keeping Watford’s defence on their toes.

With the wind in their sails, Bridge continued to push for a fifth and despite conceding a further three points from a penalty and losing Will Child to the bin following a litany of fouls across the team, it eventually came as Matt Coker charged down a kick from a scrum Uxbridge had on the Watford five metre for Pure Pooltharat ( or @swaggy_purely if you’re on Instagram....a genuinely fascinating follow if you’re interested in seeing the sheer-breadth of bars and pubs in the London area) to score.

With the scores tied at 31-31 and a few minutes remaining, extra time was a distinct possibility until the restart from Pooltharat’s try was expertly caught (well caught, as he dropped the previous one) by Mark Coles and the resulting penalty for a high tackle allowing Ieaun Jones to pump the ball deep into enemy territory.

Watford’s defence was holding firm from the onslaughts until Matt Coker went rampaging through a gap on the open side like Nigel Farage heading to the job centre, to be held up short but win a penalty. Quick thinking mercurial flanker Kyle Buckingham took the tap and go and crashed over to secure the win.

The successful conversion by Dean Poland was the last act of the game and secured Bridge’s path to the semi-finals to be held on Saturday 22 February.

Bridge are looking to organise a friendly this week (8th Feb) before returning to league action on Saturday 15 February at home to Old Millhillians. All are asked to make themselves available.