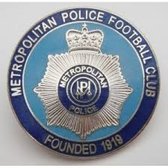 VCD arrest the slide against the Metropolitan Police

It was honours even at the Oakwood as VCD were finally able to register their first point on the board against the Met Police.

VCD were to start the half really brightly and were unfortunate not to take the lead. A beautiful passing move started by Micheal Power would lead to a wonderful chance hit by James Duckworth that would be tipped round the post and into the side netting by a greatful Stuart Searle. Met Police were then able to come back into the game progressively and the first chance of note was to fall to the VCD some 20 minutes later as James Duckworth would hit a shot that was to creep just over the bar. VCD were to enjoy the last ten minutes of the half in and around the Met Police’s box as Lea Dawson and James Duckworth would enjoy further chances apiece to open up the scoring for VCD but both would inevitably fail to do so. Half time came and went and VCD were to enjoy the same start to the half as the first yet it would be Charlie Collins of Met Police who would fluff his lines in front of a virtual open goal and parity was still to remain. It would turn rather flat until a mishit moment of magic by James Duckworth would leave Stuart Searle grasping at air and have VCD dreaming of a first ever win at their highest ever level. The dream, however, was to be short lived. Two minutes later and another mishit by Reece Hall with lapse defending by Grant Basey would again lead to parity in the game and this would be the final kind of goal mouth action in the game. Both teams seemingly happy with the point yet VCD would wonder how they had not gone on to win. So now onto Witham where we can hope to see another three points.
Share via
FacebookTwitter
https://www.pitchero.com/clubs
Recent news