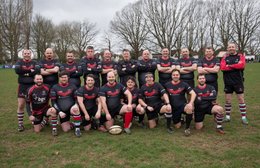 Forget Fury vs Wilder, this was the real heavyweight clash of the weekend.

In a repeat of the Vets Shield final Vigo welcomed local rivals Old G's to Swanswood, eager to exact revenge for the defeat in the Shield final back in March 2020!

Both team got off to a decent start, holding each other firm in the centre of the field. After 20 minutes it was a stalemate but it was Vigo that were starting to look the more dangerous, their big pack starting to make inroads into G's territory. A quick change out on wing for the V's, Mark Robinson (finding a number of helpful babysitters) took to the field and immediately capitalised on some quick ball out the back of a scrum. Ben Paget distributing the ball to James Emmitt who whipped the ball out and away before being grounded by a solid hit, to Justin Barrett who carved his way through a couple of defenders before getting an offload away to Robbo who was on hand to dot down over the line with ease.

James unfortunately had to leave the field with what ended up being a dislocated shoulder and a small fracture of the scapula. Rest up James and hopefully see you again soon.

Old G’s hit back and began to dominate territorially, partly through their centre pairing proving to be a real handful and partly through Vigo's indiscretion at the breakdown. A few penalties later and G's were deep in Vigo territory. Some great defensive work however from Vigo halted any chance of a try but unfortunately they coughed up a penalty on the stroke of half time. G's opting to take the points, their Number 10 slotted the kick to bring them to within 2.

The 2nd half started much like the first. A close affair, each team fighting tooth and nail to win the ball and with Old G's hefty pack making early inroads into Vigo territory their supporters felt sure there were more points to come. They were however unable to capitalise through their back line. A stray pass here, a knock on there but also some solid defending, frustrating the visitors.

The big hits were starting to take their toll on both sides with injuries forcing substitutions. First Garrick Styles off after rolling his ankle, then Darren Cox, already carrying a shoulder injury from a charity game a few weeks back, then Tom Emmitt who pulled up with a hamstring injury - not the first I'm led to believe.

But with a little injection of fresh legs Vigo began to exert some dominance, making great strides into G's territory. Alex [surname to be inserted here] epitomising this dominance by continuously denting a tiring G's pack, Rob Hayes was his usual rampant self, punching holes in the G's back line and with Pat and Dan Norton interchangeably finding their kicking boots Vigo found themselves on the G's 22 with the advantage. Scrum down, Vigo ball and with a couple of phases of forward play down the blindside sucking defenders in, Lee Whatman (on as a finisher - or finished in his words, for Ben Paget) switched play to Pat Norton who found Michael Szodi with acres of space in front of him to canter over the line.

Vigo knew they had to keep the ball tight and with the forwards in very much a 'none shall pass' mood they swiftly moved the ball back towards the visitors, recycling effectively allowing the ever industrious Rob Carleton to dance and shuffle his way all of about 40 metres to score a magnificent solo try. Dan Norton taking the extras to put Vigo in a seemingly commanding position with only 10 minutes to go.

Old G’s are never done though and they fought ferociously, coming back hard at Vigo who knew they must not allow G's midfield space and time on the ball. But, after a few phases of play and a few switch backs G's midfield were given that space and were able to release the ageless Mike Hodge who took a direct line through 2 or 3 tiring defenders to plunge over the line. Unfortunately the conversion attempt was missed leaving G's needing 2 scores to win with not a lot of time remaining.

All Vigo had to do was see out the game deep in Old G's territory but in chasing more points the ball was spilled, enabling the oppo's back line to clear and have one more go at Vigo. With last play called Vigo took their foot off the gas a little as G's heavy pack once more rumbled up the pitch. Much like Vigo earlier in the 2nd half, G's were able to suck a number of Vigo players in before they were able to ship the ball out to take full advantage of a 3 on 1. The drop goal conversion was good but G's were just short, Mr. Andrews calling time on a thoroughly entertaining game.

A massive thank you to Sam Andrews for taking the time to referee the game and to all the supporters, both home and away, young and old from both the senior and junior sides who cheered both sides on. A big thank you also to both Ollie Sims and Oliver Szodi, our 2 young waterboys, who did a sterling job delivering the H20.

Vigo Vets next game is the 21st November, home against Dartfordians. We would love to see as much support at that game as we did this.