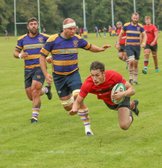 MUCH NEEDED VICTORY FOR VIGO

This season has been a bit of a roller coaster ride for Vigo, but they ground out a much needed victory away in East Sussex against an obdurate Uckfield outfit. Marcus Hunt scored the tries but it was a good all round team performance, highlighted by Vigo’s excellent back row.
Uckfield have a very nice clubhouse and immaculate pitch, and with Storm Lorenzo not having reached this neck of the woods, conditions were perfect. A much changed Vigo side saw the return of Dave Winstone into the back row, alongside Chris Johnson, making his debut for the Club as flanker, having playing full back in the previous three games. And what a game they had, with Ben Moorhouse also in imperious form. And they needed to be, Uckfield pushing Vigo hard all game. In fact Uckfield would argue that they had the lions share of territory if not possession, but Vigo’s much improved defence and the home side’s lack of discipline were deciding factors. All too often any head of steam Uckfield built up was released with an inopportune penalty. Tony Whitehead had put Vigo ahead with a penalty after just five minutes, five minutes of constant Uckfield pressure. But as soon as Vigo visited the home 22, a penalty ensued and Whitehead did the rest.
Uckfield immediately returned to the attack, a very good Crossfield kick by the stand off pushing Vigo deep. They extricated themselves very well, Moorhouse catching, Whitehead clearing and Vigo scored. Simples. The key was speed. As soon as Vigo got the ball, Uckfield panicked and the inevitable penalty ensued. Whitehead made ground, Vigo won the line out, smashed forward, recycled the ball swiftly and fed Marcus Hunt. A couple of typical side steps nonplussed the defence and over he went. Whitehead added the extras. Two visits to the Uckfield 22. Two scores. Efficient, clinical.
Injuries didn’t help the home side, their bench being cleared before the half hour, but they battled away, not averse to attacking from their own line, and almost succeeding in breaking through but Elliot Stickings and James Clemmence were particularly forthright in the tackle. Ironically, both had been partying late celebrating Dom Carslaw’s nuptials so that belies any nutritionist theory about sport and alcohol. Anyway, Uckfield huffed and they puffed, running from deep and forcing Vigo back deep, Johnson in fine form, always ready to counter from tapped penalties, ensuring the Uckfield defence were alert. Charlie Buckland kicked a very good penalty, fair reward for Uckfield’s persistence, then missed a more difficult chance as Vigo held on grimly. Half time say Vigo retreat to the changing room, relieved at holding a narrowish lead.
Uckfield started the second half strongly, bravely attacking from deep almost catching Vigo napping. As Vigo funnelled back to avert the danger, Uckfield crisply moved the ball left then right and replacement Matt de Souza plunged over in the corner to cut the lead to just two points. Vigo’s response was immediate. Working their way back downfield, they extracted yet another penalty, which Whitehead converted to extend the lead. Now it was Vigo who began to take control, belief flooding through the collective vein. They attacked along a broad front, but spoilt their good work with an over eagerness to score, snatched passes and wrong options preventing Vigo from scoring, probably three or four times. Brilliant defensive work by Uckfield set them up for a devastating attack, Vigo just about holding on, but they extricated themselves efficiently, a barrelling run by Adam Fitzgerald bringing them within striking distance. Again, Vigo managed to spoil a perfectly good scoring opportunity so Uckfield helped them out. Winning the lineout, they then made a bit of a hash of clearing. Sticking and Hunt attacked, Ollie Stringer cleverly put Hunt away. A high challenge stopped the attack, but only at the expense of a yellow card for numer 8, Dom Scott. The very good referee, Mr Hartley, contemplated a penalty try but, rightly, reasoned there were plenty of other defenders. Vigo had to make the extra man count but again spoilt their good work with some poor passing, the ball being grassed all too often. Uckfield counter attacked but themselves wasted a gilt edged opportunity with a dropped pass, with the Vigo line beckoning. Ironically, as soon as Scott returned to the fray, Vigo scored.
Vigo had been attacking, and yet again a dreadful pass ruined a try scoring opportunity, Fitzgerald having no room and forced into touch. Uckfield had been superb in the line out but this time, Vigo took one ‘against the head’, and moved the ball swiftly along the line, the passing much better allowing Hunt to have room to work. He still had a lot of work to do but went over the line, carrying a couple of would be tacklers with him for a fine try.
All Uckfield had left to fight for was a losing bonus point but try as they might, they just could not break through Vigo’s defence. The sight of 40 year old Rob Carleton straining every sinew to thwart another Uckfield attack in the last minute of the game typified Vigo’s determination. This was, if not a complete return to form for the Villagers, but a grafting, gutsy game on which they can build.

MOG’s View: Much better performance by Vigo this week. Crucial tackles were missed last week, but today the defence was much improved. Still something to work on – a number of chances to score were butchered – but the confidence and commitment are returning. When the missing players return, competition for places will no doubt improve the team and Club as a whole.