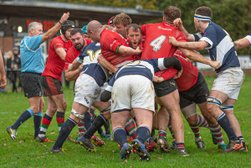 Man of the Match: Nick McPherson.

Dom Saunders (Vigo asst. coach) Pleased that we won but disappointed we missed out on a bonus point. In the last couple of games we have not played in the style in which we want to play, and today we lost our shape at the breakdown.

Tony Whitehead (Vigo captain): Tough game. We did not keep to our game plan, but I cannot find fault with the players’ application.