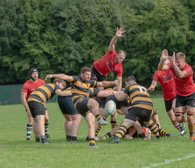 Vigo crashed against a good Bromley outfit but at least there are some green shoots of recovery to be seen. Their pack remains highly competitive, and now some of the missing speedsters are beginning to return to training, there are grounds for optimism.
Bromley came to Vigo in a Fun Bus a couple of years ago, but this year, the mode of transport was different for one of their party as his car was towed into the ground at the back of an RAC recovery vehicle. They do like to be different in the suburbs.
Vigo got off to a better start than the poor guy in his breakdown, when Ollie McSweeney-Atkins, making a welcome return to the team after injury, broke from deep, catching the Bromley defence napping – still getting used to the lower oxygen levels of the High Veldt, no doubt. McSweeney-Atkins made valuable ground before looking for support. Although his pass was half intercepted, the ball ran loose and Tony Whitehead was able to dribble the ball forward to score. That woke up Bromley but aided and abetted by a poor clearance kick by Vigo. George Hawkins, Bromley full back, who was to be a major pain to the Villagers,set off across the pitch, through some ineffective tackles before finding Steve Pillow, who shook off some equally weak tackles to score under the posts. Johnny Griffiths made no mistake with the conversion, or with a penalty soon afterwards for offside.
Both sides were now full of running putting on a good show for the good number of spectators enjoying the late summer warmth – and , no doubt, a few glasses of electric soup. Vigo rewarded the faithful with a fine try, their pack embarking on a superb rolling maul, a feature of their play this season, so far. Bromley’s pack were shredded, the inevitable penalty ensued but with advantage being played, Whitehead put up a great Crossfield kick. Adam Fitzgerald waited patiently for the ball to drop into his brawny arms, before bulldozing over from 10 yards – as we are out of Europe who needs metres?. Dave Winstone kicked a fine conversion from round about Holly Hill.
Bromley knew they were in for a hard game; they are a good side but still Vigo insisted in helping them out a bit. Yet another poor clearance kick found Hawkins, yet again his nimble feet found space, setting up a good attacking position. Bromley controlled things at the breakdown, passed along the line, Pillow having a huge space to work, scoring under the posts. Griffiths added the extras. Bromley continued to press and took advantage of another gift. Vigo tried to execute an exit strategy, and rather like Brexit, made a bit of a ricket. Bromley stripped the ball too easily, and Griffiths was in the right place to accept the gift, scoring and converting. Vigo held out for the rest of the half before jogging off to the sanctuary of the changing room. Although sanctuary might be a misnomer as Coach John Whitehead stalked after them, blowtorch primed.
Bromley’s coach warned his side that Vigo would come out guns blazing, but he needn’t have fretted. Vigo immediately handed another try to their visitors. Treating the ball with seeming disdain, Vigo coughed up another turnover, and Charlie Laws cantered home with nary a finger laid upon him. Vigo deflated, Bromley full of vim and vigour and things were looking grim for the home side. But this is Vigo. They very often appear down and out but they are always capable of biting back. Tony Whitehead found touch from a penalty, Vigo’s pack caught and drove for ten yards until Dan Norton at the back of the rolling maul, safely touched down. This was fair reward for Norton whose throwing into the lineout has been exemplary so far.
Bromley were stung into action and began to press hard, although wing forward Henry Coleman was carried off injured. Vigo fought hard to keep them at bay, but offered up another gift. An intended chip forward was instead fielded by laws, who ducked under a couple of tackles, setting up Jack Saunders for a clear run to the line, Griffiths converting. Saunders was again on hand, not long after, controlling a loose ball to cross for another soft try, Griffiths converting.
Vigo hit back for a bonus point when the outstanding Tommy Barrett smashed forward, Winstone on his shoulder to force his way over, adding the conversion as well. Down , perhaps, but certainly not out, Vigo continued to work hard. A great run by the ageless Robbie Hayes, set up Liam Wiltshire who went for the line, only to be denied by a brilliant cover tackle by that man Hawkins. It was left to Griffiths to hammer the last nail in Vigo’s coffin with two late penalties as Vigo threw everything at their visitors.
Vigo Team: O.McSweeney-Atkins; L.Wiltshire, T.Barrett, D.Winstone, A.Fitzgerald (rep: R.Carleton); T.Whitehead (capt.), G.Cook; W.James, D.Norton, S.Smith (rep: P.Sewell; J.French, B.Moorhouse; L.Henderson, D.Mickelburgh (rep: R.Hayes); N.McPherson.
Referee: Oliver Tyson (SEFed)
Scorers: Vigo : Whitehead (4’), Fitzgerald (20’), Norton (49’), Winstone (67’). Cons: Winstone (2)
Bromley Tries: Pillow (10’, 30’), Griffiths (36’), Laws (43’), Saunders (57’,62’) : Cons Griffiths (5). Pens: Griffiths (15’,75’, 80’)

Matt Witcomb(Bromley Coach): Pleasing result against a physical Vigo side. We played well and improved attacking wise on last week.
John Whitehead (Vigo head coach) A slight improvement, but there was too many mistakes round the fringes, which enabled Bromley to get on the front foot, but all credit to Bromley – a good, strong outfit. We know there is a lot of improvement still, and a lot of improvement will be had.

MOG’s view: Bit better than last week, but oh so many mistakes. Bromley didn’t need gifts, as they are a decent outfit, but Vigo insisted on gift-wrapping scoring opportunities even though there are still 91 days to the C word.