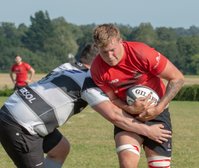 Vigo made the long journey to West Sussex and the Fun Bus was buzzing with expectation – Covid receding, a new season, things nearly back to normal, a new backs coach bringing new ideas. What could possibly go wrong?
Well, where to start? The first half was splendid, the second rather shambolic. Talk about a game of two halves. Well, let’s not. It’s a cliché but never more apt than today.
Pulborough is a thoroughly decent place to come, nice clubhouse, excellent bar staff and pukka pies for sale; add a beautiful late summer sunshine and a firm pitch, the spectators resplendent in short sleeved shirts and short skirts : the girls too. All the ingredients for a feast of rugby.
Owain James pulled up with a knee problem in the warm up but, without a replacement prop, soldiered on, hobbling from one set piece to the next. Even on one leg, virtually, and with Will James in imperious form and the solid Dan Norton, Vigo’s pack soon gained dominance in the scrums. The lines out, too, were functioning well, Nick McPherson and Ben Moorhouse, supplying a steady stream. Whilst Pulborough were invoking a steady stream of whistles by ref Simon Bingham (or, as one disgruntled home supporter dubbed Simon Ping’em), Vigo were the superior team, both in possession and territory. After just 7 minutes, Pulborough gave away a penalty which Dave Winstone duly slotted over. More penalties, Winstone kicking one, narrowly missing with another couple. The home side were shedding penalties quicker than BoJo sheds promises, but, strangely, a lack of yellow cards – that’s Pulborough, not our esteemed leader.
In fact, it took Pulborough until the 35th minute before they had their first really dangerous sortie into the Vigo half, a strong run by Ollie Burnett, who went on to have a superb game, forcing Vigo to concede a penalty. Skipper Fraser Hope slotted that to halve the lead.
Arguably against the run of play, the score seemed to breathe fresh life into a rattled home side. Vigo by now, really should have been, if not out of sight, then surely a speck on the horizon, but a mixture of poor handling and misplaced passes had negated all their fine work up front.
Coach Matt Gue had obviously inspiring words at half time, and possibly a tweak in tactics, as Pulborough came out of the half time break, with great vigour. Vigo were sent reeling by two tries in as many minutes straight after the break. Burnett made a superb break to set up Brad Game, then a huge clearance kick by Hope put Pulborough into a fine attacking position from which Max Lodell profited with a try, which Hope converted. Vigo were visibly shaken by this double whammy. The forwards continued to impress with some punishing scrums and rolling mauls, which really should have been rewarded with points. Pulborough’s front row were close to joining the nearby glider club, so often did they fly up out of the scrum, but Vigo simply could not capitalise on their forward superiority. Arguably denied at least two penalty tries as the home side’s pack was demolished close to the line. However, once the ball was clear of the forwards, Pulborough cut Vigo open with some incisive running, in which Burnett was always prominent. Will Scrace with a brace, Gain again, and a pair by Henry Limpus, plus two conversions by Hope all in the space of 12 minutes, took the game away from Vigo. All that was left was their pride.
Needless to say it was the forwards who helped to regain some dignity from a rather shambolic second half performance. They had already had a few devastating scrum drives, which had not been rewarded, but their latest with about 8 minutes left to play gave them some, albeit, small consolation. Vigo’s scrum marched inexorably to the line, Jake French in the front row for the first time in his life apparently, the indomitable Owain James, at last succumbing to injury, and there was Nick McPherson scoring under a mass of bodies. Vigo huffed and puffed for the remainder of the match but Pulborough held on, not without a few more alarms, until the final whistle.

Vigo Team: L.Wiltshire; A.Fitzgerald, T.Barrett, D.Winstone, G.Harrison; T.Whitehead (capt.), N.Covill; W.James, D.Norton, O.James (rep: J.French; B.Moorhouse, R.Carleton; L.Henderson, D.Mickelburgh (rep: R.Hayes); N.McPherson.
Referee: Simon Bingham (SEFed)
Man of the Match: Pulborough’s Ollie Burnett, the touchpaper to most of the Pulborough fireworks
Vigo MVP: Tommy Barrett, who strove manfully to plug the gaps.
Scorers : Pulborough tries: Game (42’, 62’), Max Lodell (45’), Scrace (56’,64’), Limpus (63’,67’). Cons: Hope (2)
Vigo: Try: McPherson (72’). Pens: Winstone (7’,13’)
Matt Gue: Pulborough coach: The first half was really tough going for us but in the second half, we kept the ball in hand and ran away with it.
John Whitehead: We fell apart in that second half spell, but I thought our forward domination should have gotten more reward. We were, of course, hampered by the absence of key players.

MOG’s view. A sobering match for Vigo, the loss of so many players through illness and unavailability just too big a hurdle. Pulborough realised where they could exploit the gaps and were pretty ruthless in their game plan for the second half.