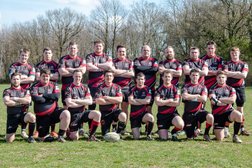 Vigo’s second string put last week’s disappointing result behind them with a very good performance against Deal & Betteshanger. In control for large swathes, they ran in four tries before withstanding a barnstorming finish by their visitors.
Starting downhill, the Villagers opened strongly and pegged their opponents back deep in their own half . ollie Stringer and the impressive Tommy Barrett worked a neat switch and Barrett belied his slight build by smashing through the D&B defence to score. Stringer converted. Game on.
Vigo continued their good work, their youthful side showing no fear as they attacked, Stringer kicking well to pin the opposition back. They tactics paid off with Deal conceding a penalty and Stringer finding touch close to the line. Vigo’s line out, apparently in good order, safely secure the ball and drove for the line. Deal piled in to but Josh Miles was able to pick up and force his way over. Again Stringer converted. But Deal were not going to lie down, fighting back strongly to force Vigo back. As Vigo began to come under pressure their discipline and concentration slipped. First they gave away a penalty, then were too slow in recovering their defensive positions. Deal tapped and went through a disorganised defence to score a converted try.
Vigo regathered themselves and were soon advancing again, Barrett running well at outside centre. Deal were again forced back deep and there was Dan Couchman to plunder his usual try. One of seemingly hundreds he has scored for Vigo, this was typical, Coochie slamming over from probably five metres, his scoring instincts un-lessened over the years. A marvellous player (is that enough, Dan?)
So the second half began with Vigo in a relatively comfortable lead, able to give the highly promising young prop Harry Newby his debut. But Deal had other ideas. Now with the slope they advanced menacingly, building a fair amount of pressure. With pressure came the inevitable penalties, which the visitors used to build more pressure, until Vigo cracked. From an attacking line out D&B secured the ball, popped it up to their big number 8 who crossed for a converted try. Suddenly a comfortable 14 point lead was down to 7, Deal had their collective tail up and they came hard. Couchman and Cox , the two wise old heads, worked hard to stem the tide and gradually Vigo regained control. In fact, but for some poor passing and catching, Vigo might well have added to their lead. Vigo broke up a Deal raid, Couchman spiralling a superb clearance kick miles down field. The covering full back was sacked, but Deal were awarded the scrum, which Vigo promptly took against the head. As the scrum broke up into a maul, Cox broke off and drove for the line to edge Vigo that bit further ahead.
Deal & Betteshanger didn’t have much time and furiously returned to the attack. Vigo held firm and were gratefully pumped the ball into touch to celebrate their first win.