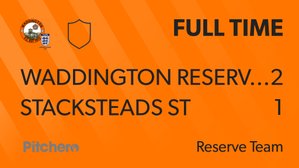 Reserves bounce back with another classy win!

Saturday brought some early autumn sunshine to Twitter Lane as our reserve side entertained Stacksteads in their East Lancs Division Two game yesterday afternoon. Coach Scott Threlfall had a number of players missing again for this encounter as a settled side continues to allude him but welcomed back young Donovan in goal and the added bonus of Wilkinson making his first full start of the season alongside fellow young guns Mason, Simpson, Pritchard and Jones.

Starting with a 451 formation working on building from the back and keeping the ball on the floor to play to our key strengths Waddington started exceptionally well. Having listened and acted upon the instructions given in the pre-match preparations the team played with a level of intelligence that we haven't seen yet from this young side.

It took just 15 minutes and a five pass move from goalkeeper to scoring our first goal of the game when Dec used the space our full backs dropping deep created to pass the ball to Chatburn on the edge of the Waddington penalty area who then played it to Mason in the middle of the park, he did well to evade the challenge of the Stacksteads midfield before passing to Harry Wilkinson who then played a weighted pass into Walsmley running through on goal who took it round the keeper to score. Quick concise and extremely good football it gave the team a huge amount of confidence and they began to control the game making several chances before Stacksteads scored an equalizer against the run of play.

Our defence had opportunities to stop the run of the Stacksteads attackers on the edge of the box but chose to stand off as the tricky 11 for the visitors proved quite a handful bursting into the box and taking advantage of slack defending to set up a teammate for an easy finish. Totally against the run of play as Waddington had been in control up to that point.

A yellow card for Wilkinson after a spat with the Stacksteads midfield was the only other low point of the first 30 minutes and Waddington went back in front just after the half hour mark when another brilliant move combining 7 passes from start to finish with only one interception from the defensive team resulted in Pritchard applying a classy finish to make the scoreline 2-1.

Parkinson received the ball on the right hand side from Donovan in goal played the ball inside to Dugdale who played a one touch pass into Wilkinson. A quick one two with Walmsley and a ball through to Pritchard on the angle gave him an opportunity in front of goal but he still had loads of work to do taking the ball on the byline and sliding a low finish from a tight angle past the despairing dive of the goalkeeper. Pritchard took his goal with a level of maturity that we haven't seen from him so far and this bodes well for the future.

A sending off for the away side just after the break and a number of bookings including two for Waddington in the combative Mason and Pritchard were the only real highlights of the first 20 minutes of the second half until Walmsley had a great opportunity from a good run and pass from Jacob Simpson to secure the points but was unable to convert the chance. Jones and Simpson proved too much for the under strength Stacksteads side in the second half and although the visitors pushed hard in the second half to get back in the game, they were always going to be caught out on the counter and Jones and Simpson linked up well again to allow first Wilkinson to have a shot on goal which was a tame affair and then Walmsley to strike a fine shot that hit the crossbar from 20 yards.

Adrian Hurst made his first start in over a season and a half to anchor the defence allowing Dugdale and Parkinson to take a breather and linking up well down the right with both Simpson and Pritchard respectively.

The last 15 mintues saw Stacksteads pushing higher and higher up the field in search of an equaliser and a great 1 on 1 save from our young goalie Donovan. However if a fourth goal was going to be scored it always looked more likely to come from the home side.

Not only a good win but the football played was excellent in large patches of the game and bodes well for the future. We have a balanced squad that when all are available will cause problems for any side in Division 2. but its this core of younger players that will drive Waddington forward over the next few years.

Threlfall has repeatedly said that he wants to build his team around these quality young players so having this group fit and available is a massive plus for the tangerines.

A good three points and we can enjoy our weekend!