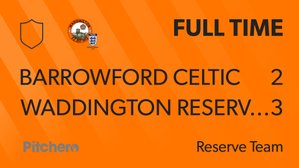 Another good win for quality reserves side!

Young guns shine in the sunshine!

Another game and another slightly changed defence. What would we give for a regular starting 11 each week. Despite having to make changes to the defence with the late pulling out of the quality Donovan in goal and the return of Clarkson at right back Threlfall was able to field a strong side again for the second week in a row.
With the game being played on a 4g surface it had the potential to be a tricky fixture and one that perhaps last year, the reserves would have lost by the odd goal in three.

This year however, its a different story.

Threlfall has given this young team a purpose, a style and way of playing that when everyone performs to the best of their ability will undoubtedly earn them a lot of points this season.

Playing the same 451 formation as we started last week in our 2-1 win against Stacksteads, we dominated the opening exchanges and the young Barrowford Celtic team were unable to get out of their own half for the first 15 minutes. The home team were playing a 352 formation and we didn't allow them to win any 50 - 50 balls in the middle of the park. However, this young Celtic side can play some football and what they lack in understanding. strength and experience they more than make up for in ability, resilience and youth.

It was no surprise that they began to look for the long out ball over the top of our defence looking for the pace of their forward line to make things happen and against our slightly slower back line they always looked good value to create the odd chance against the run of play.

Harry Wilkinson continued his fine work on the ball making things happen in the final third only for our final balls to be poor and not up to the required standard and the attack to fizzle out. The experienced Dugdale picked up a calf injury after 20 mins and had to be replaced with Chatburn. After 25 mins the home side staged an impressive counter attack and a long ball over the top between Chatburn and Jones was picked up by the Celtic striker who powered into the box and after a fine save by the returning Anderson in goal was parried out to the feet of another Celtic player who stabbed home we found ourselves 1-0 down.

This was totally against the run of play and after Threlfall substituted the injured Pritchard and brought on Ainsworth we upped our gear. After several toothless attacks we managed to get back into the game when a great run from Jason Lamb down the left and a square pass to Wilkinson who sent the ball out to Harrison who in turn set up Charlie Ainsworth to score his first of the season with a calm finish to leave us at 1-1 at the half time whistle.

Changing to a 352 at the break brought instant dividends as the possession we enjoyed enabled us to keep the ball in and around the Celtic penalty area and create more clear cut chances. The back three had changed to Kemp, Chatburn and Jones and this allowed Clarkson to push up into midfield and gave the impressive Charlie Ainsworth a central midfield role which he thoroughly embraced and it was some direct play from him down the right channel that created the second goal which was coolly finished by the clinical Walmsley.

More attacks followed as our midfield continued to control the game forcing Celtic into the long ball up to their fast strike force but our back three were equal to the task at hand. With 30 minutes left on the clock Parkinson went on for Clarkson in a like for like substitution and further enhanced our dominance down the right.

Jason Lamb continued to push forward on the left and get crosses into the box, combining well with both Wilkinson and Mason in the middle of the park. It was from a Lamb run that our third goal came as a good cross to the back post was met by Harrison who's initial header wasn't cleared and bobbled around the box before finding the head of Mason who dinked a header into the back of the net from 5 yards - a fully deserved goal for our most consistent player.

Barrowford Celtic had tried throughout to play football and it was a credit to them that they didnt give up and continued to press to get back in the game. With 8 minutes to go they did get a well deserved second goal from good work from their midfield forcing mistakes from our back line which resulted in the Celtic striker having time to get his shot off and finishing well past Anderson in goal.

That was the final action in a well played game with two sides who wanted to pass the football. Second win on the bounce for our young reserve side and the third win in four as we begin to play to our strengths and Coach Threlfall continue's to implement his style of play.