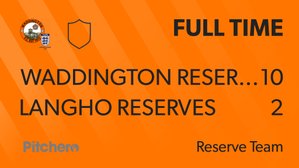 Strength in numbers as reserves begin to get up to full strength in strong showing against Langho on Wednesday night.

As the mist rose over Pendle Hill and the rain lashed it down on a blustery autumn evening at Twitter Lane, so the 40 or so spectators at the game were witness to some fantastic football from our reserves on Wednesday night against Langho.

With plenty of reserves now coming back from injury or first team duty and both squads at the club getting stronger by the week now we are out of the August period, manager Scott Threlfall had a near full strength team to choose from. Opting for a blend of youth and experience the tangerines started perfectly with a brand of fast paced, high pressing, fluid football that had their opponents shell shocked and unable to get a foothold in the game.
Nathan Jones our young left back played with an air of youthful arrogance mixed with an experienced head and will surely be pushing for a first team call up soon. The returning Martin Kemp alongside the rock that is Rob Lloyd gave the whole team a base to build their confidence from and so it proved from the off with any hope of a Langho attack extinguished by our strong defence.

Marco Mason fresh from first team action last week played the holding midfield role perfectly as usual and has to be one of our most consistent performers. The returning Joe Cunningham playing for the reserves to gain much needed match fitness was able to let Marco win the deep balls giving Joe time and space to play through the lines bringing our front line and wingers into the game.

Fittingly it was Joe who started the scoring off with a perfectly timed run from deep onto the edge of the area where a good ball from Jacob Simpson found him to tuck the ball under the goalkeeper and into the corner. This was a fast start and proved to be a catalyst for the flood gates to open.

More good work from Jones and the returning Roger Haythornthwaite on the left hand side played in Warmsley whos shot was parried into the path of Gary Brunskill who finished easily. Such was the intensity of the Waddington Football at this point that we were completely controlling the middle of the park and playing some nice two touch and triangle football to get in behind the exposed Lango defence time and time again. A couple of flurries from Langho on the counter attack were met by our own quick build up play and Warmsley was on hand with a neat finish to score the third goal not long after.

Neat play from Jacob Simpson resulted in another opening for Brunskill to bundle the ball home from a melee in the box and then Warmsley got in on the action again benefiting from chaos in the Langho penalty area to poach his second and our 5th of the game with minutes to go before the half time whistle. There was still time for Jacob Simpson to work the angles with Anton Gawthorpe down the right before a neat one two and a finish from young Jacob that belied his young age.

Six - nil at half time and with the game effectively over, Threlfall made several changes, bringing on the returning Adam Hutchinson for some much needed game time and replacing Gawthorpe who had been excellent at right back. Olly Harrison came on to replace Haythornthwaite and Jacob Simpson switched to the left hand side to accommodate Harrison on the right.

The second half started much the same as the first with Brunskill scoring a superb goal to claim his hattrick on 50 mins through neat play from Harrison and Walmsley. Further changes followed as Threlfall rested his essential players for the trip to Grindleton on Saturday with veteran Jason Farmer replacing Marco Mason in the middle and the moving to right back as Adam Hutchinson swopped positions with him.

Young Charlie Ainsworth replaced Jacob Simpson with 30 minutes to go and Walsmsley came off for new signing Aaron Woodhouse too.

Credit to Langho who didn't give up and were more direct and aggressive in the second half as they tried to lower the deficit but were always vunerable on the counter. It was from just such a counter that Charlie Ainsworth got in behind the Langho defence and planted a great cross onto the head of Brunskill who made it an easy finish for new signing Woodhouse to score on his Twitter Lane debut.

Mentality is a big thing in football at any level and game management is born from mentality and this is an area we still need to work on as we took our foot of the gas and with several changes still trying to get to grips with the pace of the game we conceded to a fine Langho finish with 15 minutes to go.

Too many touches and not enough movement contributed to the away sides goal and the last 15 minutes were a sloppy affair with both sides getting plenty of chances and three more goals including another for the away team.

Gary Brunskill scored the 9th and his 4th of the game after great individual work and the willingness to go for every loose ball and then Woodhouse scored our 10th and his 2nd with a fine peice of dribbling and a corner finish after the Langho defence went missing once again.

Langho had the last word, with a fine long range shot not closed down by our tired midfield and our defence who were too deep, going over Declan into the net.

A dominating performance by the reserves made all the more satisfying by the first half performance and the way the lads listened to what was said in the changing room and made sure they did it to the letter.

This reserve side will only get better and better as the season progresses and if last night is anything to go by, the visitors to Twitter Lane are in for some goals and excitement.

A great performance and a massive three points in the context of the early part of the season.
Man of the Match - Gary Brunskill