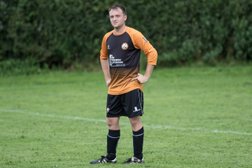 Too many errors cost Reserves at Grindleton

If the Langho game was a joy to watch and produced some fantastic football then Saturdays match at Grindleton was exactly the opposite.
Forced to make several changes to the match day squad including losing our goalkeeper Declan Donovan to a first team call up, we were always going to start slower than we did in our previous game.

Three games in seven days meant several of the squad were tired after the exploits on Wednesday night so the return of Mason, Simpson and Wilkinson was good to see.

Grindleton are a much improved side from last season and its a credit to their tenacity that they refused to lie down and instead looked to come at us from the start. Early pressure on the Waddington back line was met with a nervy response from the usually reliable Kemp and Lloyd who were a little too quick to go to ground in the opening exchanges. This nervy start filtered throughout the team as we began to make simple mistakes with our own passing game and this allowed Grindleton to dominate the first half without getting many real clear cut chances.

A catalog of errors led to the first Grindleton goal as three players combined to create an opening for the Grindleton forward to slot home under the keeper.

Waddington made changes at half time moving young prospect Jacob Simpson off the right hand side where he had been ineffectual against the larger and stronger Grindleton midfielders and putting him up front where his movement, pace and skill allowed him to do much more damage. The returning Harry Wilkinson was moved into a forward midfield role to give us more creativity and this produced our equalizer almost immediately after the break as good work from Wilkinson and fantastic movement from Warmsley allowed Simpson to go one on one with the defender and slot home under the advancing goalkeeper.

This should have given us a way back into the game but unfortunately the nervousness that had hampered our whole game so far continued to plague us as our midfield couldn't get hold of the ball and gave away too many free kicks causing our back-line to be over worked and make uncharacteristic mistakes.

A simple cross wasn't defended properly and the lack of talking in the Waddington defense cost us a ridiculous goal in the 60th minute as the over hit ball bounced in the box and went straight into the net with our goalkeeper motionless. A third goal for the home side followed more poor defending after a bad clearance and a fourth followed shortly after as we lost the ball first in the midfield then in the defensive third where we didnt win our 1st or 2nd balls and leaving a simple finish for the striker.

Simpson and Wilkinson combined again late on to make it 4-2 but another late set of mistakes cost us a fifth goal on a day to forget for the tangerines. Grindleton will never play a poorer Waddington team and must be thanking their lucky stars that we didn't have our regular goalkeeper in too.

Lack of workrate, losing too many first and second balls and too many individual errors all contributed to the worst performance of the season and Threlfall will be pleased that night games have finished so they can get back on the training pitch and work on things.

Onwards and upwards after a difficult 7 days.