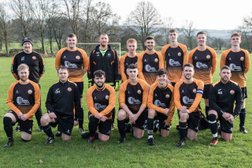 Positives to take from 4 goal loss!

Reserves down and out but not beaten!

With no referee provided for this fixture, (Thanks East Lancs League) and Waddington Reserves Manager Scott Threlfall electing to referee the game in order for his young team to get some much needed game time in, we were behind almost before we started at Twitter Lane on Saturday.
A host of players missing for various reasons, a makeshift defence and the up and coming young starlets Simpson and Norman continuing their fine runs with the First Team meant that we went into the game with just 12 men.

Staying true to the formation that has served him so well this season and bringing in two new signings in young Joel at right back and Zak Holgate up front, Threlfall would have expected a better start than he got to be fair.

Just two minutes into the game the visitors went 1-0 up with our makeshift defence finding themselves out of position and the Whinney attacker hit a fine finish into the top corner. This spurred our lads on to find a instant reply and on 20 minutes the ever present Mason hit a 30 yard shot which took a deflection and hit the post with the keeper beaten.

That was a forewarning of what the afternoon held for us as we created a small number of chances and they huffed and puffed for the rest of the first half with the score 1-0 at half time.

At half time, the Waddington Manager emphasized to the players that although he couldn't coach them as the referee, he wanted them to start strongly and remember they were still well in the game and they could be proud of the performance they had put in so far against one of the best teams in the division.

Whinney Hill are a big, strong fit and technical side and its a credit to them that they gave no quarter to our guys as the second half began and used the ball over the top to open up our defence again just 30 seconds after the restart. Our starts to the second half of games have been nothing short of shocking for the past few games in a row and this is something we have to pull together as a team to fix otherwise we are going to lose more games.

The shock of conceding another soft quick goal immediately after the restart took the wind out of the Waddington sails and they conceded again 7 minutes later when a cross field ball found the Whinney attacker who was on side and who then raced through to slot past the onrushing Donovan in goal.

Then we had Twenty minutes of midfield battling as our boys tried their best to get back into the game and not concede any more goals. Which to be fair to our boys, we did battle very well throughout. Harry Wilkinson will be some player for the First team next season and he quite rightly took the player of the match award as his driving runs and close control constantly looked to create things for us and where only hampered by our extremely poor movement up front, which was a tribute to the defence of our opponents.

Tired, battle weary and lacking reinforcements our lads conceded a fourth near the end of the game which was well taken by the skipper for Whinney Hill who had been a thorn in our side from the off.

So a 4-0 defeat, against a very good side who will be near the top of the league this year. A big, battling game of football that saw our young lads go up against men and come out with their pride intact after matching them tackle for tackle, shot for shot, kick for kick in a good game of football.

Whinney Hill are a quality side and we should have no shame in being beaten by them as our performance levels might not have been what we have come to expect, but our battling qualities were tested and not found wanting.

This group of players continues to get better and better and we push onwards and upwards.

On another note, the Whinney Hill team behaved impeccably towards me as the referee of the game and i would like to say thank you and good luck for the rest of the season to them.