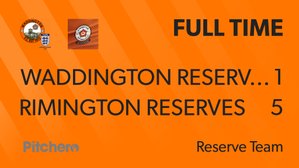 Hard work for young lads against strong Rimington side!

Would this game change or define our season? No. Would this game give either side a season ending victory? No. Would it provide another years bragging rights between village football teams? Yes of course. Would it be a good yardstick of what our young Waddington squad was capable of as their progression continues? Yes definitely.

With the answers to the questions above, you can see how we went into the game from our perspective. Yes it was important to put in a performance but would a defeat end our season or change anything we are trying to do? Absolutely not. Our very young reserve team is a work in progress and what progress has been made already this season wasnt going to come undone versus a much older, very aggressive and physical Rimington team.

In my experience, playing against teams like this when your still young will only help your progression provided you are prepared to try and match your opponents tenacity and aggression.

Before the game we spoke about the need to give Rimington a good game, let them know they had been in a battle, make it hard for them to get a result.

Ultimately for large parts of the game that's just what we did.

Danny Anderson the first team goalkeeper who nearly joined Rimington in a botched transfer attempt last year was brought in to replace Donovan with Threlfall opting to give the young goalie a rest. Lacking most of our recognized center halves and playing utility man Akrigg at the back with ever present Chatburn we also went with two fast fullbacks in Mason and Gawthorpe to try and match the speed of some of the Rimington forward players.

Its a credit to the way both our teams have adopted our on field approach to keeping the ball on the deck that we played some fantastic football in the opening 15 minutes with the ball going from back to front, using the wings and getting in behind the Rimington defence time after time. Unfortunately we couldn't make the most of some of our early chances but it was nevertheless very encouraging to see the work from Chatburn, Norman, Wilkinson, Swizz and Ainsworth in particular as the quality and accuracy of their passing range was very good.

The average age of our young team is just 22 years of age and would have been younger but for Anderson, Gawthorpe and Akrigg bringing the age of the team up. This showed in the way we dealt with certain situations as the more experienced Rimington team started to get on top.

They were finding it difficult to get through our five man midfield and started to ping long balls up front looking for their strikers and trying to get the ball in behind Chatburn who's lack of pace was there to be exploited. To be fair, we coped well with the long balls, we carried on having most of the ball but created very little in the opponents penalty area.

After 30 minutes, the score was nil vs nil and we looked comfortable until an uncharacteristic error from Mason at right back, dwelling on the ball outside his own area and being tackled led to the first goal when the winger floated a cross to the back post which found the top corner. He will say he meant it, but it looked like a cross to me!

1-nil down and not having played that badly, we quite rightly felt a little bit hard done to at that point and Rimington started to get on top, winning most of the second balls and constantly looking for the long ball through the middle of our center backs. It was inevitable that one of them would sneak through and we should of heeded the warning shot when one such ball allowed the Rimington striker through on goal and one on one with Anderson in goal who came out and delayed his dive to brilliantly stop the goal and send the ball out for the corner.

Unfortunately less than 5 minutes later, another long through ball gave the striker for Rimington an easy finish past Anderson and into the net to make it 2 vs nil.

At half time we talked about getting the ball down and out to the wings were we could hurt them and not to focus on the score as it was about the performance not the result. As i have said many times this season, this is a group of lads that listens and works hard for each other and that's just what they did in the second half as we started like a steam train and had most of the possession again just like in the opening 15 minutes of the game.

Jacob Simpson came on for Jason Lamb who had worked extremely hard in the first half out on the left wing. Charlie Ainsworth had his best game in a Waddington shirt so far as he constantly got in behind the Rimington defence and sent many a good ball into the box only to find no one there on the receiving end.

Great work in the middle of the park from Norman and Wilkinson combined with Ainsworth putting in a good ball into the box found Swizz on hand to poke an effort home from 6 yards to bring us back into the game. At this point, nearly 60 minutes on the clock, it looked like we could
get something out of the game.

Sadly that would all change less than ten minutes later when against the run of play an attack from Rimington saw the ball roll towards the dead ball line behind our goal only for the ball to stop dead on the line. Anderson had left it thinking it was going out and didnt see the striker for Rimington right behind him. The striker retrieved the ball, sent it into the area and despite a terrible mishit from the Rimington man, it hit Gawthorpe in the legs and rebounded into an empty net.

A calamitous goal to give away and one that took the stuffing out of us to be fair. After that goal our legs became heavy as the pitch, and the constant battling against a very strong Rimington side took its toll. Walmsley up front on his own for most of the game without getting much of the ball was out on his feet, Wilkinson had been on the end of everything that was good for us and looked shattered on 75 minutes and Swizz and Chatburn were also very tired as we went into the final half an hour.

Threlfall made some substitions bringing on Harrison for Swizz, Jones on for Wilkinson and Pritchard on for Walmsley but the last 15 minutes would bring two more goals for Rimington and seal a 5 - 1 defeat for our young squad.

Was it a 5 v 1 performance? Not at all. The Rimington manager applauded our team and made the effort to congratulate them on a fine effort at the final whistle. The last two goals really came down to how hard Rimington had worked our back line for the previous 75 minutes and were a reward for being stronger than us not the better footballing team.

Overall a 3-1 defeat would have been about right and this Rimington team must be considered as champions elect as they have all the qualities to win pots, they are strong, aggresive, some of them are downright mean and nasty (but in a footballing way) and they all have talent and ability.

What is great about our Waddington side though, is that we were the better footballing team for long periods of the game. If we can get the levels of aggression and strength that Rimington showed and make that part of our game, we will be on the way to winning a lot of pots ourselves.

We can hold our heads up high and consider this game all part of our learning curve. On another day, without the cock up for the 3rd goal, we would have seen a much closer result against a fantastic Rimington team and I am happy with our progress. When our lads came off the field yesterday they were disappointed with the result but not with their individual performances because each of them put a shift in. They made Rimington earn the win and sometimes in football, that's all you can do.

As 2019 ends and 2020 begins, we can approach the rest of the season with expectation that we will win more games than we lose and we will play much worse than we did on Saturday and still come away with points.