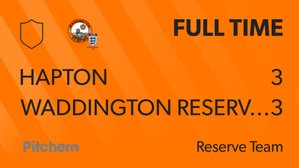 No presents yet for plucky reserves!

Christmas has to wait as young guns denied win

On a blustery afternoon at Accrington Academy 3G the young reserves once again showed a resilience and ability that belies their young ages. Its true to say that we have a style of play, a formation and an idea that we know what we are good at and when we stick to that we get the best out of each other. Its still early days but the work we put into training and the effort we show in games, coupled with our camaraderie gives us hope for a positive season. This showed in the result here vs a battling Hapton side.

Going behind three times and still salvaging a point from the game is something that was perhaps beyond a few of them last season. This season has seen them grow as players and their battling qualities shone through on Saturday against a much older and bigger Hapton side.

Outplaying Hapton for large parts of the game, we fell behind thanks to a poor piece of goalkeeping on our part allowing a fairly simple shot to go into the net rather easily. Not to be fazed by going a goal behind our midfield five continued where they left off against Polonia last time out and used the ball well.

Mark Leitch partnered the ever ready Chatburn in the heart of the defence and they will hope to formulate a real understanding for the rest of the season as we continue to not be able to pick the same two centre halves every week. They will have been disappointed with the amount of shots from distance that they allowed through but their work on the ball was every bit as good as we have come to expect from this team this season.

Threlfall has welcomed back Connor Howarth into the fold in recent weeks and hopes to get the best out of him over the remainder of the season. Starting on the left of midfield Connor linked up well with Walmsley in attack and Harry at the front of our midfield three, with young Ainsworth on the right hand side also a threat. It was through some good link up play that Walmsley found himself with only the keeper to beat after 20 minutes and just when he looked liked scoring the keeper took him out and referee pointed to the spot.

Walmsley or "Wammer" as he is affectionately know to the fans and players alike, has been playing well since the start of the season and the formation setup from Threlfall seems to be getting the most out of him. So it came as no surprise that he slotted the penalty away with ease to make it 1-1.

Waddington continued to have most of the possession but only managed to create a host of half chances whilst Hapton tried to go direct and hit the crossbar a couple of times before they scored a second goal 10 minutes later. Another give away from our point of view unfortunately and we will need to work on our defensive and goalkeeping duties more if we want to start winning games again going forward.

What we do have at the moment, is a great team spirit, hard work ethic and a fantastic attitude and its these qualities coupled with the undoubted ability that our young squad has, that once again got us back in the game. More good work from Mason winning the loose ball and great use of the ball from Swizz in the centre of the park released Howarth on the left who after some neat interplay with Wilkinson they once again got "Wammer" into the box only for him to be fouled again and win his second pen of the game.

Stepping up and neatly converting it gave him a second goal of the game and put us back on level terms once again.

Second half started pretty much the same as the first, Waddington playing all the football yet Hapton's direct approach and some slack defending from us as a team allowed them to get their third and have their noses in front once again just after the restart.

Our second half performances have been worrying recently, since the Read game were we conceded late second half goals, so its a credit to the boys that not only did they manage to score and pull level again ten minutes later but that they didn't concede again.

Walmsley was once again left unattended to by the overworked Hapton defence and stole in to bag his second hat trick of the season and make it 3-3 with half an hour to go.

A shattered Swizz made way for the reliable Harrison who has been missing through injury, and young Joel did well when he came on with 25 minutes to go for Jones at left back. New signing Usman got his second start of the campaign coming on for the last ten minutes for young Ainsworth who did well and with a bit of consistency would be a regular in the starting 11.

The last thirty minutes was fairly even and given the shared chances both teams created a draw was probably, on reflection, the correct result.

Another point and more importantly we have learned how to battle against teams who lack some of our ability but have lots of aggression and stamina to counterweight it.