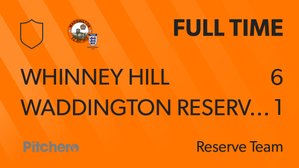 This proved to be the most challenging game yet this season. Losing half the reserve squad to the first team due to continuing problems with first teamers availability and in the case of one player... a bad cold... was bad enough but then losing all your substitutes the day before the game just made things even worse.

Visiting a very strong Whinney Hill team with only 11 men and arriving at the ground and seeing they had 18 players it became clear that the longer the game went on we were going to struggle as they could bring on fresh legs. In the dressing room Threlfall called for that unique team spirit that has seen this reserve side not only win games this year but win them playing some great football.

Setting up with a 4 2 3 1 formation was extremely defensive but with only one recognized center forward and a couple of players who don't play regularly for us it was the right decision. The home team started on the front foot, clearly fancying their chances against our weakened side. Playing quite high up the pitch they put us under immense pressure but its a credit to the back four that they didn't buckle and its doubtful they would have buckled before the half time whistle had it not been for a very dubious penalty decision against Donovan in goal. The Whinney Hill no.7 racing through on goal before falling at the feet of the keeper and the referee from around 30 yards away pointing to the spot. The penalty was poor and should of been saved but Donovan was a little flat footed and it went in at the side of him for 1-0.

Queue that Waddington team spirit again.. within 10 minutes we were level with some route one football that Big Sam would be proud of, the ball found Pritchard who sent a pass to Ainsworth who chipped it to the head of Pinard. He won the header and as Ainsworth was challenged and the ball bounced up into the air, Pinard was able to wrap a long leg around it and dink it over the onrushing Whinney keeper. 1-1 and some surprised faces on the touchline.

That should of been the half time score but unfortunately the man of the match for Whinney Hill was a young winger who gave Fitzgerald at full back a torrid time and he managed to get to the byline with 5 minutes to go and send over a hard low cross which Leach diverted into his own net. A soft and very unfortunate goal to give away and especially so because other than that, Leach didn't put a foot wrong to be fair.

Half time brought more calls for team spirit, work rate and strength in the dressing room as we literally couldn't make any changes. It was this inability to make any changes that would cost us at least three goals as Whinney made several changes on the heavy pitch and were able to freshen up their tired legs whilst we were left fighting for our lives with 20 minutes to go.

Whinney Hill scored their third just before the hour mark, a towering header that crept in from the big striker from poor initial marking. Their 4th was a very well taken goal from their man of the match as he headed a cross into the far corner of the net from the edge of the penalty area leaving no chance for Donovan in goal.

Tiredness had set in and Chatburn and Blackledge playing the holding roles in front of the back four had run themselves into the ground, our midfield three had stopped winning balls in the middle of the park as Whinney took a stranglehold on the game. Two more goals followed one a lucky deflection but the other just good football from our opponents.

6-1 the final score and a disappointing result but not unexpected given the problems pre match and the team we had to field. Two positives to take away though. Not only did our scratch side battle really well for 70 minutes showing all the qualities that matter but also Harry Wilkinson, Elliot Norman, Joe Swizz, Connor Howarth and Deco Critchley all did well for the first team too despite the scoreline in that game.