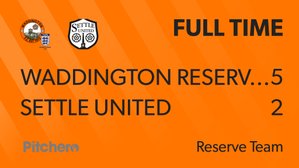 A fine, dry day on Saturday at Roefield 3G saw our young reserves play Settle United Reserves in the Quarter Final of the Norman Pratt Trophy. After last weeks shoddy defensive performance at Langho, Threlfall made one or two changes to the team that started that day, preferring Chatburn and Mason at the back and bringing in new signing Deco at right back, whilst Donovan returned in goal.

Early exchanges were poor from both teams but our defensive frailties didn't look like they had gone away in what was a sloppy first half. Things looked good for us when Swizz recieved a ball on the edge of the penalty area from Walmsley and promptly smashed it into the right hand corner of the net, the keeper getting nowhere near it, to make it 1-0.

Not long after, Settle United got a corner and from the resulting ball in to the box and with no challenge coming in from any Waddington player, Settle where level after a simple header into the goal. If that was infuriating, then what happened 5 minutes later was even worse. Another corner, several failed clearances and a distinct lack of marking allowed the Settle United forward to slip in and side foot the ball into the net. Very poor from our defence and we suddenly found ourselves going 2-1 down.

Just before half time a good ball in from a corner from young Blackledge found the head of the ever impressive Norman who's dipping header slunk into the back of the net, going over the head of the full back on the far post and making the scoreline 2--2.

Half time changes needed making and Lloyd came on to replace Pritchard up front with Wamsley dropping into the hole at the top of the three man central midfield. This gave us more opportunity to hold the ball up and stop it coming straight back at us as it had in the first half. With 50 minutes on the clock, Threlfall brought on Howarth for Chatburn with Leach returning to Centre Half alongside Mason.

Although Howarth hadn't played much this season so far, he had a massive impact on this game. Within 15 minutes of coming on he had scored two goals and was a constant problem to the Settle United defence. His first goal, (our third) was a lovely inside run past two defenders before a simple effort past the keeper. His second and our 4th was another great piece of skill before a dipping bending shot around the dive of the keeper from the edge of the area. A good performance from Howarth and if he gets his head down and continues to be available then he will be one of the first names on the team sheet.

Game over at this point, Settle United had continued to drop back further and further and by the time the fourth goal went in, they were practically camped on the edge of their box. No surprise then that we scored a fifth in the last ten minutes as Walmsley, who had worked hard all game managed to get clear of his marker and after good work in the air from Lloyd had a one on one with the goalkeeper which ended with the ball in the back of the net.

A good second half performance and several positives to take away from the game with Deco doing well in his first game for the club, Mason fantastic at the back , Norman and Swizz continue to impress and Blackledge getting stronger by the week doing well too.

Rimington next in what will be an entertaining game as our young guns go after a first piece of silverware.