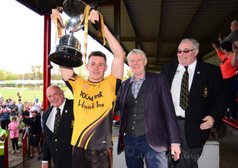 Wadebridge Camels won the Tribute Cornwall Cup for the first time in seven years when they defeated holders St Ives in a cracking final at sun-drenched Redruth, writes Nigel Walrond.

It avenged their 20-19 loss to the same opposition in the 2018 final, when the Camels had to play for more than 50 minutes with only 14 men after Adam Collings was sent off.

Despite the one-division difference between the two sides, it was expected to be a close affair, and it did not disappoint.

Camels led 15-9 against the higher-league Hakes at the interval.

A kick over the top by Owen Wilson set up an early try in Hellfire Corner for winger Shawn Hartley, converted by Thomas, but penalties either side of that by fly-half Grant Thirlby left St Ives trailing 7-6.

Wadebridge scrum-half Owen Wilson then sniped over in the right-hand corner, and even though Thomas missed the conversion and a penalty attempt, he banged over another three-pointer for a 15-6 lead.

Hakes full-back Jack Kessell dropped the ball with the line at his mercy before Thirlby kicked his third penalty, just before Camels had prop Jack Scott yellow carded, but St Ives failed to capitalise on their numerical advantage.

However, they started the second half well with a try by former Redruth winger Lewis Vinnicombe on his old stomping ground.

Thirlby improved that score, and despite a Thomas penalty putting Wadebridge back in front at 18-16, St Ives took a firm grip on the match with a fourth Thirlby penalty and his conversion of prop Ben Taylor’s try

Camels, though, refused to lie down. A try by Cornwall lock Rupert Edwards 11 minutes from time cut the gap to three points, and five minutes later, a poor clearance kick was caught by Darren Livett, he fed Man of the Match Danny Thomas, who set off on a fine burst before linking with centre Will Pengelly, and he ran a great line to score by the posts, with Thomas adding the extras to make it 30-26, and Wadebridge hung on for victory.