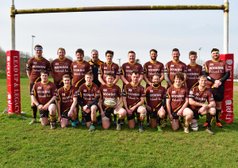 In the final league game of the season Camels produced a fantastic display of powerful opening rugby against a spirited Falmouth side........

In the final league game of the season Camels produced a fantastic display of powerful opening rugby against a spirited Falmouth side.
The powerful forward running pack performance epitomised by Ed Keast and Russell House allowed half backs Jack Sander and Charlie Jenkins to dictate the play and Camels raced to a 30 /0 half time lead.

The display also saw further excellent improvement with the development of the new defensive system which didn't allow the visitors any respite even if in possession with Ben Madigan and Ben Farrant always to the fore.

With a raft of half time changes Falmouth did come into the game more but were restricted to a late consolation try but Camels sealed the win with 6 further tries to march on towards their cup final 19th April at Redruth. The remaining games are home to North Tawton Sat 6th and home to St Agnes on 13th.
Tries:- Ben Farrant (3), Jack Sander (3), Tom Instance , Russell House, James Davey, Rhys Bright.
Convs:-Ben Farrant (4).