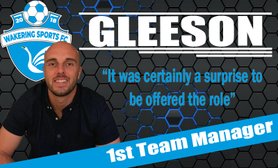 First interview with the new manager

I'd be foolish to say we'll win the league, but I feel realistically, we should be aiming for a top 5 finish
Mitch Gleeson - Wakering Sports First Team Manager

It was a surprise to hear of Aaron Bloxham stepping down and everyone at the club thank him for his time and efforts. Was it equally surprising for you to be offered the role as first team manager at the club?

It was certainly a surprise to be offered the role. It is clear that Bloxham and his team had done a good job last year as Wakering Sports had a decent season. They finished in the top half of the table, only 5 points behind the top spot and were clearly challenging for the title up to the final weeks of the season. Once he had decided to step down, Wakering Sports contacted us about the idea of bringing Christchurch FC over to become the first team. This is something that we were interested in as many of our players were looking to progress and make the step up. This gives them that opportunity.

Bloxham, and his assistant John Radford, always spoke about how hard it was to get a settled side. Is this something that you feel is also important at this level?

Yes definitely. A settled side at this level gives you consistency and a means to create a nucleus around which stabilises both the starting eleven and the squad in general. Playing with the same lads week in week out improves quality and creates a strong team work ethic. I am happy with the squad I have this year and feel the players will settle quickly as a lot of them have already played together for many years. The new lads we have brought in will need to prove themselves at this level and gel with the team quickly but that is pretty standard with any new players. We're hoping that due to the players having played together for some time, will give us a running start which we can build upon.

Do you feel that you can compete at this level with the side you have brought across?

As Christchurch we played in the Southend Borough Combination league last season and our home games were also played at Cupids. We've been close to the Wakering Sports set up for some time and have already forged a good working relationship between the two clubs. When the 1st team manager position became available it provided the opportunity for my Christchurch side to step up a level and this was something I was very interested in. A lot of the lads were looking for the extra challenge and I feel they are all ready to compete at this level. I'm sure that we'll be competitive but the opening games of the season will provide us with the level that we will need to perform week-in, week-out.

Are you looking at bringing more players in?

I'm happy with the current squad and feel we have a good bunch that will play well and work hard for each other, this has been proved over the past few seasons. I am always open to bringing in new players but I am big on work ethic and attitude. I want players that enjoy the game and settle in quickly with the lads around them. If we bring more players in they will need to approach the game with a positive and hard working mindset. They will need to buy into our way of playing and be willing to contribute to the teams performance.

For this season to be successful, what would be your realistic targets?

I'd be foolish to say we'll win the league, but I feel realistically, we should be aiming for a top 5 finish. I have looked back through the last 5 years and the 1st team at Wakering Sports have never won more than 11 league games in a season. My first target is to try and beat this. I would be lying if I didn’t say we want to win the league. With the squad of players I have it is definitely possible. I have some real quality and a bunch of lads that have played together for a number of years. If they settle quickly at this level then I feel we could really challenge.

What are your initial thoughts on the clubs aims for Step 6 standard?

The club is making some great moves forward towards Step 6. Firstly the ground improvements that have taken place during the close-season are fantastic. Tony has invested well and his team have worked hard to get the pitch looking superb. It is definitely somewhere that the boys are looking forward to playing this season. Also the link between Wakering Sports and the Colts provides the opportunity to develop youth talent and gives them a pathway straight into men’s football. Developing youth talent is something I am a huge advocat of and feel this will benefit the club hugely at the next level.

The club have good development sides to progress and develop players from youth. Is this something that you will look at developing further and have close ties with, by giving youth players some experience with first team matchdays?

As I've previously stated, I am a firm believer in developing youth talent and feel this is key to success if the club wish to make the step up. If players are ready to be progressed then they should be given the opportunity to show their talents and be exposed to the demands of the game at the next level. I have worked within youth football for many years, through my role as a P.E teacher at Shoeburyness High School. I have managed teams across all senior school age groups and I am in charge of the sixth form Football Academy Team. This has given me the opportunity to work with youth talent and watch them develop all the way through to men’s football. In fact, some of my ex-school football team players are in my Wakering Sports 1st Team squad for this season. I intend to work closely with the youth team mangers so that the right players are given the opportunity to progress.