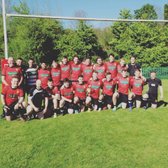 Finishing the season in style

Walcot 2nd XV travelled across town to face local rivals Stohert & Pitt RFC in the final league game of the season, with both teams looking to finish their campaigns in style. Walcot edged the encounter earlier in the season, however knew that it would be a tough battle against the Cranes as it always is. The weather conditions were perfect and this made for an excellent battle at Adams field.

Walcot won the toss and opted to tackle the slope in the 1st half, however a handling error from the kick off gave the home side an opportunity to strike early on. Walcot’s defence was tested right away, with Stothert’s applying pressure from the off. The Cranes produced numerous phases but failed to breach the Walcot defence, with Ben Tottman & Louis Mullane leading the line. Following Stothert and Pitt’s strong start Walcot manged to get a foothold in the game and began to utilise their pacey back line. Winger Matt Wedding opened the scoring beating his opposite man with jinxing footwork to score in the corner. The conversion edged wide but Walcot had a 5 point lead and the momentum firmly on their side.

The away side continued to play some flowing rugby with centre partnership Glenn Irwin & Alex Metrieiver running excellent angles. Man of the match Orkhan Freeman dictated the play from scrum half and looked dangerous around the fringes. The Cranes struggled with the pace and Walcot forced a kickable penalty just outside the 22 with Nick Dagger securing a further 3 points. Stothert & Pitt reacted well to the penalty, finishing the half strongly with an unconverted score of their own. At half time Walcot led 8-5 but knew that the first score of the 2nd half was vital.

Walcot restarted the game and instantly retained possession through an excellent chase by Bradley Stonehewer. The Walcot pack continued to work around the corner and smashed their way up to the 5m line. The second score came through Ed Perry who broke from the side of a breakdown to crash over under the posts. Nick Dagger added the conversion, giving Walcot a 10 point cushion. Stothert and Pitt had the luxury of a 14 man bench to utilise, and their replacements brought a new intensity to the home sides play. The home side enjoyed a purple patch midway through the 2nd half scoring two unconverted try’s and bringing the scores level at 15 – 15.

With the game very much in the balance Walcot secured a vital penalty in the opposition 22, which outside half Dagger converted to give Walcot a 3 point lead. The home side came back again and thought they had scored in the dying minutes, but an outstanding tackle from replacement second row Erik Lenferink forced a spillage from the attacker player, and Walcot were able to clear their lines. With seconds left to play Walcot secured the ball and quick hands gave Nick Dagger an opportunity counter attack. Dagger showed great speed to beat his man on the outside shoulder and ran in to secure Walcot a tough fought victory.

The game finished 23-15 to Walcot who finish the season in 7th position on 69 points, their highest points tally in recent years.