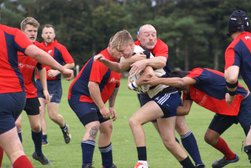 Perfect mix of youth and experience keeps the 3rdXV winning.

Avonvale 2ndXV struggled with the early pace of Walcot flyer Korey Williams as he jinked through the defensive line and raced in for a try to open the scoring. Ben McMullen added the conversion before the visitors hit back with a try 7-5. The Avonvale forwards generated momentum with offloads in contact area and took the lead with a converted try. Walcot reacted with good phases of possession and slick handling in the backline sending Williams over for his second try 12-12.

The visitors used their larger pack to retake the lead with a push over scrum. Then Walcot upped the pace with Chris Martin making a darting break with good support play from back row forwards Ed Parsons and Ryan Grubb. Quick distribution from scrum half Sean Long saw the ball whipped through the backline with Huw Rees putting Arthur Rousell into space out wide for a race to the tryline. McMullen added the extras as to level the scoreline just before half time 19-19.

Shortly after the break Nick Edwards made a good break in the centre to put Walcot on the attack and with two quick passes Rousell was racing in for his second try 24-19. Avonvale tried to hit back with strong direct runners but were stopped at source by a masterclass in tackling from fly half Wilson Skyrme. The Walcot playmaker also showed his skills in attack with a dummy pass and sprint to the line for a try under the posts, capping off a man of the match performance 31-19. The hosts battled through to the end and it took a try saving tackle from Stuart Foxon to keep the winning margin comfortable.