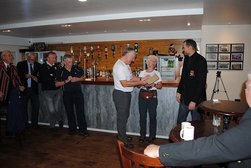 Jeff Blackett arrived here on the last leg of his walk in Cheshire on his national sponsored tour of the constituent bodies of the RFU. Taking in four clubs: Caldy Hoylake New Brighton and us. Accompanied by his wife Sally, Colin Free and David Ewing, he covered over eleven miles in sometimes atrocious weather conditions. After this he had to drive down to Gloucester for the 12th leg of his tour to raise funds for the Injured Players Foundation.
Considering it was at 2pm on a Monday afternoon when many had work restrictions he was given a warm welcome at the club with many members turning out to greet him, all dressed impeccably in full Club No1's. He was due to spend ½ an hour with us before moving on, we were lucky enough to keep him 3 times that, in a rare but special Rugby moment.
This is HH Jeff Blackett’s Bio from the RFU National Board:
Jeff played most of his rugby for US Portsmouth and represented London University, the Royal Navy and Hampshire. He is a past president of US Portsmouth and a life member of the Royal Navy Rugby Union. He joined the Council in 2000 as the Royal Navy representative and has been the RFU Disciplinary Officer (2003 – 2010), Chairman of Governance (2014 – 16), Chairman of the PGB (2016 – 18), and a member of the Board of Directors from 2015 - 2018. He was a judicial officer for three Rugby World Cups (2003, 07, 11) and heavily involved in World and European discipline during that period. He was elected RFU President in 2020. He is a retired Senior Circuit Judge, Deputy High Court Judge and the Judge Advocate General of Her Majesty’s Armed Forces
The Club will be making a donation to the Injured Players Foundation and any individual donations are also welcome at: https://rfuipf.enthuse.com/cf/rfu-presidents-150th-walk
Share via
FacebookTwitter
https://www.pitchero.com/clubs
Recent news