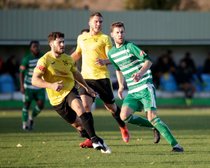 Successive Defeats for the Abbotts

The Abbotts fell to their second league defeat of the season with another lack lustre display at home to Westfield Fc.

The Abbotts welcomed back Junior Appiah & Aaron Gordon to their starting line up and Rob Clark started his first game since returning from a lengthy injury lay-off.

The home side started slowly and appeared sluggish facing the wind in the first half with the visitors pressing them back into some serious defending in the early moments of the match. Some good goalkeeping and last ditch tackles kept the score goalless.

It was no surprise that the visitors took the lead on twenty minutes when a communication error between Jorgensen & Dear allowed Hamilton-Olise to head home from close range.
One became two only five minutes later when a poor pass from Twumasi left the the Abbotts defence exposed and the impressive Goather-Braithwaite broke smartly to fire it past the despairing dive of Jorgensen into the far corner.

The Abbotts finally seemed to wake up after this and started to fashion out some chances of their own. They came very close to pulling one back when Gordon went on a mazy run and squared to Hallett whose deft back heel came back off the inside of the near post into the keepers hands.
Rob Clark then curled his shot from 25 yards just over the bar.

Michael Spencer & Billy Holland made two changes at the interval bringing on Simms & Domafyie for Appiah & Clark.
The home support hoped this would see the Abbotts have a real go in the second period.
Unfortunately this wasn't the case with the visitors still in control of the match, some more good goalkeeping and solid defending & blocks by Dear saw Westfield unable to add to their two first half goals.
The Abbotts best chance in the half fell to Domafriye who made Shaw pull out a very good save but the Abbotts just couldn't get a goal to kick start a come back.

At full time Westfield ran out fairly comfortable winners and the Abbotts need to go back to the drawing board to rediscover their early season form. Too many players appear to be going through the motions at present.