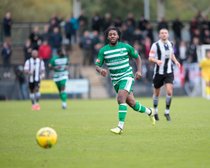 Holland's Hero's Hold Out at Hertford

Waltham Abbey put up one of their most resilient performances so far last night at Hertingfordbury Park against the odds after being reduced to 10 men after only 25 minutes in the wind and rain. After opening the scoring from a set piece on 9 minutes, bundling the ball home, Ryan Dear received his marching orders following a desperate lunge to deny a goal scoring opportunity for the Town 9. In sad fashion however it was disappointing to see the whole Hertford team surround the referee and remonstrate but such is modern football. The home side, completely revamped, look an exciting prospect and passed the ball around with the aplomb of a pro side and a kid who had found his first packet of sweets.

The game is all about end product though and the Abbott's, now down to 10 knew they had to dig deep to get something from this encounter. Town now had their tails well and truly up as they sensed it would only be a matter of time before the 10 men visitors would succumb to their slick passing game. What they didn't bank on was experience and resilience and they were rocked when Holland guided a deft header into the corner for a 2-0 away lead. In the end it was to be the match winner. To a man now the Abbott's knew what they were in for and regrouped. As the half time whistle came, the Town centre half could be heard calling "wear them down" but one sense that despite possession being off the scale, in reality the giant Jorgensen in goal was rarely troubled and when he was, pulled off unorthodox saves to spare his blushes. One in particular a near post shot that almost caught him out. Symes had pulled one back for the home side, a delightful shot on 54 but anything after that was either half chance or woeful heading and finishing.

With Holland now having dropped into the back four and marshalling the team, time and time again Town failed to break through. Umpteen offside decisions went against them. Hallett upped his game and chased everything in midfield and Gordon reminded the home side that the Abbott's were not going to lay down and caused problem after problem as Town pushed forward leaving gaps at the back. It must be said, the playing surface at Hertford was seriously good and produced some slick football. A few years back that couldn't have been said. Well done Town.

Everyman played their part at the Park, the Abbott's fans in the main stand also now vociferous behind their team willing them to hold on for victory. Anyone reading the reports and seeing 5 yellows and a red too, don't be mistaken, this wasn't a battle, a few niggles yes and the ref bought it. It was good confetti practise for his next wedding thats all. With an additional 5 minutes the fans were relieved to hear the final whistle and broke into song as they applauded the players. A fortuitous win? Maybe but isn't that what football does at times? The away fans to a man lined up and applauded the Hertford players as they took their own salute from their home fans at the Stable End. It was a truly fitting gesture as this team were good and could (will) surprise a few teams this season.