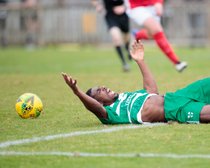 A Bridge Too Far

The Abbotts looked to freshen up their team during this busy schedule with several changes to the starting line up from Tuesday night's win at Hertford.

The Abbotts started brightly but struggled to find a cutting edge and failed trouble the home side keeper. Uxbridge gradually got into the match but likewise Rossetti had no real saves to make. However the Abbotts took the lead in 34th minute when Kambo Smith was brought down in the box and the resultant penalty was slotted home with aplomb by Leon McKenzie.

The half time interval came with the visitors holding a slender 1-0 advantage but they were to rue not pushing on to increase that lead.

The home side started the second half well and were looking for an equaliser. The Abbotts back four were playing a high line for offside which was working well but was fraught with danger.
On 63 minutes the Abbotts offside line was breached or was it (it was tight) but the linesman was only human keeping his flag down and Bates raced through rounding Rossetti prodding it into the empty net.
The Abbotts responded well to the equaliser including a succession of four corners that caused some consternation in the home defence but they stood resolute. Clear cut goal scoring chances for both teams were few and far between though.

It was apparent that the toll of playing 65 minutes with ten men in midweek against Hertford was telling on some of the visitors, as the game was approaching its later stages. The home side were pressing hard for the winner with the visitors hoping to hold on for a penalty shoot out to decide the tie.

It was however to be a home win rather than a penalty shoot out as in the 89th minute with Hedley firing home the winner which deflected off Billy Hollands boot and sending it past the despairing dive of Rossetti.

A disappointing end to the match for the Abbey players and travelling away supporters but a single goal lead is always a slender one and the Abbotts paid the ultimate price for not adding to it.

Report by The Dear Hunter