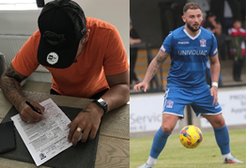 Wantage Town are thrilled to announce the massive coup of midfielder Jack Alexander!

Alexander comes with a dazzling footballing CV that includes 11 Scotland youth international caps, amongst spells for Liverpool U18, Bristol City U18, Eastleigh, Swindon Supermarine and most recently table toppers Thatcham.

We are confident that Jack will be a key figure and feature of this new looking Wantage side this season, who also shares the same values and ideas as the manager Matt Biddle after several one to one conversations.

“I am extremely happy to have Jack on board with us this season, after our first meeting I was enlighten and impressed with his views on his football. But more so impressed with the high level of maturity that he conveyed during these discussions, especially for someone still at a young age. His background and ability speaks for itself and won me over even more with his excellent character and attitude. We can’t wait to get started!”

Jack (23 years of age) has already built up an impressive 64 appearances for Swindon Supermarine in the Southern Premier South League and 59 appearances for in the Southern League South Div one side Thatcham. 31 of those caps coming from their title winning season last year (Unofficially) with a 70% win percentage in the games Jack played in. Still with plenty of time left on his career, we are delighted he will be showcasing his talent at Alfredian Park this season.

“After a long few weeks of thinking a few things over, I am happy to now have committed and signed for my local club Wantage Town. I have known the gaffa for a while and always shared the same views on football. Bidds is a top bloke and looking forward to putting in the work out on the training field and pitch together. For me, playing local football and knowing the manager as I do, played a big part on my decision. Also, along with the fact that my old man (Jamie Alexander) also played for Wantage a number of years so Wantage has always been a part of my life. Now I get to experience putting on the green & white this year and can’t wait to get going!”

The icing on the cake for this signing is the fact that Jack is a local lad who lives in the area, of which I’m sure will go down very well with the local fans and everyone involved at Wantage Town a like.