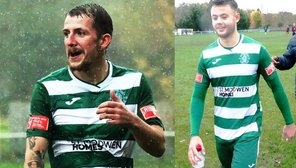 Wantage Town are delighted that Josh Tooke and Nate Robinson have also agreed to continue plying their trade with the Freds!

Both players were a regular feature from last season and were very much improving further game by game.

Josh Tooke came to us at the start of last year from Kidlington FC and slotted in the squad very nicely predominantly as a defensive midfielder. Tookey never missed a competitive game appearing in all 12 games before the season ended early. Although scoring 2 goals in pre-season, unfortunately never managed to net in the season, but gaining 2 MOM awards and 1 assist (which was at the time was in debate if the ball went over the line before Marley Hamilton touched it, however VEO confirmed it was a Tookey assist instead of a goal). Most memorably Tookey was in excellent form for 6 games in a row starting, averaging 8.33 from those 6 games from Aylesbury to Thame United. Incidentally was where he got awarded MOM in a game that ended with Wantage 3-2 winners.

Another player that excited Wantage fans last year was Nate Robinson! Nate also joining us for the first time at the start of last season, comes with a playing background from multiple clubs in and around this level. He was another player that featured regularly in the starting eleven, making 11 competitive games and finishing last seasons top assists with a tally of 5 to his name. Although Nate didn’t notch last season, it wasn’t for the will of trying, as keepers and woodwork seemed to always prevent him from doing so! Confident that this year he will be also adding goals to his game! Just makes the thought of him playing for the green and white this season even more exciting.

Furthermore signings will be announced throughout the week! Keep your eyes peeled!