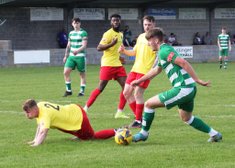 RESULTS ROUND UP FOR THE SENIOR TEAMS 16-19 APRIL

At the eighteenth time of asking Wantage secured a home league win, defeating Kempston 3-0 having beaten the same side at home in the League Cup earlier in the season. A strong start from Wantage saw Jamal Branker fire wide from Alex Fragata’s cross on five minutes, before Callum Crook headed home a Jack Alexander free kick in the seventh minute.

Chief Boateng put over a minute later, before a Jake Pemberton block prevented Sam Johnson levelling in the 10th minute. Kempston’s Tremayne Charles was making inroads down the left flank, but his crosses were either cleared or over shot their mark.

Crook should have doubled the lead on 39 minutes, but dallied when well placed and by the time he got his shot away found the path to goal blocked. But a minute later Wantage made it 2-0 as Boateng broke free and lifted the ball over the advancing Joe Ringer.

Charles was close to getting on the end of a Ben Baker cross 11 minutes into the second half as Kempston looked to get back into the game. Wantage’s Alex Avenell pushed away a good effort on 72 minutes, and Johnson nearly netted for the visitors on 74 minutes but was denied on the line by Charlie Kille.

Wantage underlined the deserved win seven minutes from time as substitute Max Whitfield worked himself one-on-one with Ringer before squaring to an unmarked Boateng who had a simple tap in.

Crook had another chance in the 91st minute, but couldn’t beat Ringer at his near post, and Charles again failed to meet another Kempston cross a minute later. But Wantage held out for their first home league win, and only their third clean-sheet of the campaign.

Easter Monday saw an Oxfordshire derby against Kidlington, a side including several ex-Wantage players and management, and who had won the return fixture 3-2 on New Year’s Day.

And a repeat looked to be on the cards as the visitors raced into a 1-0 lead inside five minutes, Connor Mattimore scampering down the right before finding Rhys Wells who finished with aplomb.

But on the back of a confidence winning performance on Saturday, Wantage grew into the game, weathered the storm and pulled themselves level on 33 minutes when Jamal Branker got on the end of a cross from the right, drew keeper Harry Way and slotted past him to the bottom right corner of the goal.

Just before the interval Chief Boateng almost repeated his lobbed goal of Saturday, but saw the attempt go just wide after clearing Way.

Wantage faced up the slope in the second half, but made an instant impact as Callum Crook fired them ahead after just a minute, a fine drive to the top left corner.

The visitors were struggling to break down a resilient Wantage defence, led by impressive skipper Jack Alexander, and although the game was quite open in the middle third chances at either end were scarce.

Probably the best of those fell to Kidlington’s Ellis Hercules who fired over on 73 minutes and then headed wide in the fourth minute of stoppage time.

Kempston’s defeat at Biggleswade meant they couldn’t catch Kidlington who are now likely to finish fourth from bottom. Wantage, of course, already could not escape the bottom two but are now level on points with Colney Heath; Saturday’s last-day-of-the-season fixtures will determine the final positions.

Match Details can be found here.

Wantage scrapped a draw at second bottom Marlborough. Alfie Johnstone scored for the hosts, while Ben Hummel found the net for Wantage, the first goal the side registered since mid-February.

Following Saturday’s game nine of the squad tested positive for COVID meaning Wantage couldn’t field a team. With the Hellenic League deciding not to re-arrange games at this stage of the season a home win was awarded.