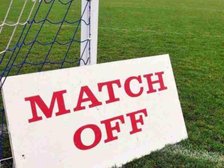 Unfortunately we have have requested, and been granted, a postponement of tonight's Southern League game at AFC Dunstable following the difficulties some of our squad are having in obtaining sufficient fuel in the current crisis.

Unfortunately the game is an hour and a half's travel each way for us, or longer for some players.

Apologies to our hosts for having to do this as we appreciate the effort that goes in to hosting games, and thanks to the league for being so understanding.

Hopefully Saturday’s Oxfordshire derby v North Leigh will be unaffected and go ahead at Alfredian Park as planned.