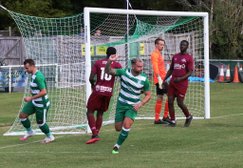 Wantage make a fantastic start to the season bagging 3 points!

Like all first league games of the season, both teams approached the game with excitement and optimism with the hope to get off to a good start. It was Welwyn Garden City where the first key chance fell to in just 2 minutes. A deep cross fell to Welwyn winger who got his shot away but only to draw an excellent save from Joe Gorman with his feet. It then didn’t take long until Wantage had their first chance with Kai Mahon winning a free kick deep inside the Welwyn half. At the first chance of asking Wantage took full advantage, with Nat Robinson delivering a delightful cross, that was met by the head of Jack Alexander, who completely lost his marker from clever run to the front post to finish nicely. 1-0 to Wantage after 4 minutes is a start all teams would dream of. After this both teams really cancelling each other out with no real chances to report until the 25th minute where Welwyn delivered a cross the met the head by the big centre back, which was straight at Joe Gorman who smothered it comfortably.

1st half it was probably fair to say Welwyn slightly had the lion’s share of possession, however never really troubled the Wantage defence. Just before the half time whistle, Wantage had a golden chance to extend their lead where Kai Mahon linked up nicely with Ryan Knight after a few exchanges, that ended with Kai Mahon one on one with the keeper, only for him to have scuffed his shot wide agonisingly wide.

2nd half both teams struggled to create any clear-cut chances and were most engaged in a midfield battle. Early on in the second half Wantage unfortunately lost skipper Olly Goddard to injury, forcing them to reshuffle at the back especially as Dan James came off with an injury early in the 1st half as well. Welwyn had a chance of their own to equalise having skipped past a couple of Wantage players, but the shot was weak and dealt with by Joe Gorman and eventually cleared by Jack Alexander. Wantage weren’t finished yet after some tidy work by Dec Shepperd getting away from two men, managed to get the ball out to Kai Mahon, who cut inside to find a shot that was saved by Welwyn keeper. The rebound was a rushed attempt by Ryan Knight that was easily dealt with by the keeper. However, after that chance it wasn’t long before Wantage doubled their lead, which all started with an excellent tackle from Josh Tooke. Then finding Kai Mahon who delivered a ball down the line that should have been easily dealt with by the Welwyn defender. But the tireless striker Ryan Knight put enough pressure on him to force a mistake and got himself one on one with the keeper. Still under a lot of pressure, Ryan Knight calmly slotted the ball past the keeper putting Wantage 2-0 up and bagging his 3rd goal in two games. Welwyn kept trying to break the Wantage defence, mainly causing a few problems from corners and free kicks. However, the Wantage defence stood strong, and kept the clean sheet they deserved finishing the game 2-0 winners.