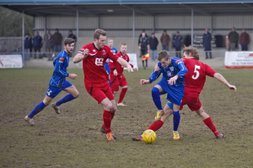 Become a Vice President
And help bring success to the town's football club.

Becoming a member of the Vice Presidents Club gives you the chance to help Ware FC in its ambition to grow and progress through the football pyramid. At the same time vice presidents will receive a share of any cash rewards the club generates through on-field success.

Ten-year membership costs £5,000 but those wishing to contribute less may do so with the term of the vice presidency being shortened on a pro rata basis. For example a contribution of £2,500 will qualify for a term of five years. The minimum membership term that can be purchased is two years (£1,000).

Those who prefer may pay in instalments. The minimum instalment is £100 per month. Any cash rewards received whilst the instalments are being paid will be used to offset the outstanding amount due for the membership.

Any individual may purchase additional terms for family or friends. There will be a maximum of twenty vice presidents at any one time.

How does it all work?

The money from the Vice Presidents club will go towards the running of Ware FC with the ultimate aim of improving its success on the field of play. There are two potential consequences of this:

What return will I get?

Distribution of the allocated money will be on the basis of one thirtieth of the total revenue for each vice president.

Vice presidents will be entitled to entry to the boardroom for refreshments before and after each home match and during half time. In addition vice presidents will have a reserved section in the main stand for themselves and their guests.

Vice presidencies are available to those who have the interests of Ware FC at heart. Participants must therefore understand that there is no guarantee of any financial return nor that any returns that do accrue will provide an overall profit. However, it is hoped that the additional income from the scheme will generate success on the field and produce a steady rate of return.

Ware FC is currently a members club. A vice presidency does not convey any voting rights to participants.

What is the lifetime of the scheme?

Each vice presidency lasts for a maximum of ten years although additional, overlapping terms may be purchased for family and friends. Such additional memberships may be transferred to the purchaser on expiry of the original term.

Can I transfer my membership to someone else?

Vice presidents may give up their position in favour of another interested party but only with the agreement of Ware FC and within the lifetime of the original vice presidency.

Ware FC reserves the right to decide to whom it will make vice presidencies available.

On the death of a vice president their position in the VP Club may be passed to a nominated successor subject to the agreement of Ware FC.