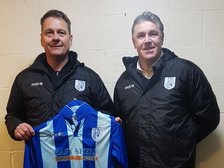 Former Football League player and assistant manager is joined on the bench by Paul Halsey.

The club is pleased to announce that it has appointed John Dreyer (right in the picture) as its new manager. John comes to us with experience in the Football League first as a player and later as assistant manager at Stevenage and Preston North End. He has also managed in non-league and in particular was in charge at Maidenhead United when they were elevated to the then Conference South.

Whilst the club's ambition is to reach new levels in the non-league game it is concerned not to lose sight of its local roots. Coming in as John's assistant will be former manager Paul Halsey who has managed Hertford and comes to us from Hoddesdon.

With these appointments Ware FC enters 2018 with the aim of improving on and off the pitch. The chairman wants to move the club higher up the pyramid and bring the local community along. The plan is to lay an artificial pitch for next season which will go a long way to achieving both aims.